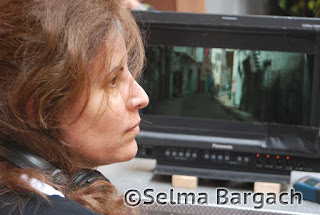 Selma Bargach’s intellectual and creative pursuit has intersected the boundaries of social science inquiry, cinema and gender, eventually settling for the artistic expression of filmmaking. She talks about her trajectory in cinema and her latest film Indigo.

Selma, could you talk a bit about yourself, your cinematic trajectory?

My career is atypical. After a year of architecture, I preferred to study the visual arts and cinema. The 7th art became a passion with the realisation of several short films in super 8mm. My professors encouraged me to pursue a doctorate, which allowed me to discover Moroccan cinema and to meet several directors. At the same time, I did an editing internship at Antenne 2, and in addition created an association on Maghreb arts with Mansour Abrous, a dear friend who unfortunately just passed away. I ultimately returned to Morocco to work for the foundation ONA as head of the audio-visual segment. I realised that I needed to be free and not attached to an institution. While watching the rehearsal of a scene from a film by Hakim Noury, the producer Maria Pilar Cazorla, who also passed away too soon, almost forced me to join the crew. That is how I caught the cinema virus! So I started as an intern, second, then as first assistant director, then ... again, I directed short films in 35mm, and finally my first feature film [Fifth String, 2011], which travelled around the world and won several awards. Indigo is my second feature film.

And your latest film, Indigo what is it about?

Indigo is the colour blue of the aura given by a psychic to children endowed with clairvoyance or hypersensitivity (mediumnity). In the film, Nora, a 13-year-old pre-adolescent, is confronted with violence and the world of the irrational. Her entourage is disturbed by her visions but seems indifferent to her suffering. Indigo tells the initiatory journey of this child in search of her own truth.

Why did you choose this subject?

This theme is universal as well as a controversial issue because it is often taboo when it comes to children’s experiences; a world where it is often painful to talk about oneself, if not impossible, especially when it comes to evoking a difference. Hence, children cling to their imagination, realising that it is necessary to grieve in order to be accepted and to accept themselves.

I wanted to tell the story of a child, confronted with a society where people are lost because they are preoccupied with their problems and controlled by their egos. It is also the rejection and abandonment of difference by a standardised system even in its perception of each other’s world. There is a form of alienation of the individual in an environment that is less and less attentive to one's inner world and one's spirituality.

This story undertakes a reflection on the relationship between the indescribable world related to the senses, and the more rational medical world. It is also a reflection on that which is unspoken and the consequences that this can engender. The action is set in a contemporary Morocco caught up in preconceived ideas and the traditions of another age. This is the paradox, between people who go to see fortune-tellers but who refuse to accept those close to them who have premonitions or very strong intuitions. The story could take place anywhere else, where children are confronted with a world they do not understand. It is a film that focuses on the imaginary and its powers.

Everywhere, people are seeking their place in the world, in their family, in their relationship as a couple. In the film, there is Nora, this lonely child, left to herself, desperately looking for a way to prove that she exists in her particularity and in her difference. And, there are the other characters, submerged in a incredible system, traversing through time, tired and dreamy, desperately seeking a way out while ignoring the suffering of childhood.

What were your experiences during the shoot? Especially with the character Nora…

There was a very beautiful, caring energy on the set. The whole team was completely involved, which allowed everyone to work together. We had fun doing this film even though some scenes were particularly difficult, which allowed Nora, played by Rim Kettani, and Mehdi, played by Mohamed Waheb Abkari not to be disturbed by their role. I did not tell them the story in advance in order to not lock them in a universe. Each scene was a new discovery for them. For them the endeavour was to remember the emotion in which they were a week before, to relive it, and transform it into a new emotion. It was pure happiness to direct the actors and work with this freedom.

The challenge was to keep a relaxed atmosphere, camaraderie on the set and at the same time to create the inverse effect of tension and incomprehension among the characters during the shooting of the scenes. They all had to stay charged with a sense of inner violence, as if they could collapse at any time, unable to express themselves, or to express the unspeakable.

What have been the public's reactions so far to the film?

The film has been screened twice for the moment. There was an incredible encounter with the French audience. The room was packed and people did not want to leave. I loved seeing the reaction of the filmgoers and the questions that the film provoked. Everyone has their own reading and their own truth about this sensitive and often taboo subject. Moreover, I left as much an opening as possible in the film to make room for everyone's reflection and imagination, out of respect for each other’s perception of the world. It is a film that invites us to accept others in their difference and to leave them their place, which is something that our current world increasingly forgets to do.

You are also researcher, academic. In 1997 you defended your doctoral dissertation entitled, "The status and role of women in Moroccan cinema". Although it has been more than two decades, I am fascinated by this subject, which continues to be relevant! What were the results of this research?

At the time, the films that dealt with this subject presented more of a general overview rather than addressing in depth the real issues confronting women. The filmmakers ultimately were looking more so to recount to each other through a cinema focusing on the social, rather than to impart the real problems of women. Moreover, there were not many women in the various film sectors, which has since changed.

Some thoughts on this subject in the present?

Society and mentalities have evolved, and so too have the themes of the films and their treatment. In these films, the woman is articulated differently, the man as well, but there is still a lot of censorship and self-censorship regarding one’s ability to express oneself more deeply on subjects like sexuality or freedom. From my point of view, there is considerable progress in freedom of speech, but not yet through the image. To see oneself through the eyes of one's peer continues to disturb when it comes to laying oneself bare, revealing oneself physically, even psychologically. There continues to be a great deal of modesty and red lines that are not to be crossed.

Has your academic work in cinema had an influence on your work as a filmmaker, development of characters, scenario etc?

Researching in the context of doctoral study makes it possible to hone in on a problematic in relation to one’s specialty. In my case it was "The status and role of women in Moroccan cinema". It is therefore necessary to conceptualize this field of research and to probe it as accurately as possible, while at the same time deploying a critical approach. This work requires a great deal of research and a purely scientific writing so that one’s ideas lead to a thesis. In the case of making a film, there is obviously the work of research, of questioning, of writing as it relates to a desired subject. But there is also a search in itself, of issues of an emotional and instinctive nature, even unconscious sometimes, that we will not find in an academic work. Being a filmmaker has brought me much more than my academic work has, in that it has allowed me to ask deeper questions while soliciting my imaginary through creative work, which is less scientific.