African Women in Cinema Highlights of 2010 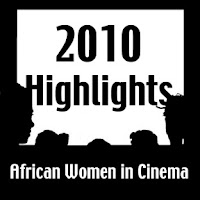 This list is not exhaustive, it is a modest attempt to highlight significant events relevant to African Women in Cinema.

Through African Eyes: Conversations with the Directors Volume 2

Survey African cinema through candid, revealing conversations with thirty of its most vibrant and innovative voices!

Volume 2 of African Film Festival, Inc.'s series, Through African Eyes, continues the conversation begun in 2003's Dialogues with the Directors. In Volume 2: Conversations with the Directors, thirty new voices join this dynamic discussion through one-on-one interviews and group conversations, exploring their own personal experiences and examining the landscape of African cinema fifty year after its inception. Together, they illuminate trends in African filmmaking, ranging from emerging regional film industries and evolving gender dynamics to the redefinition of the very term "African filmmaker."

Critical Essays
Reading the Trajectory of Postcolonial African Cinema by Mamadou Diouf; Regional Developments by Sean Jacobs and Adam Esrig; Writing on Walls: The Documentary Tradition by Jean-Marie Teno; The Evolution of Women in Cinema by Beti Ellerson; and A Lesson in Cinema by Mamadou Niang.
Posted by Beti Ellerson at 17:31 No comments:
Email ThisBlogThis!Share to TwitterShare to FacebookShare to Pinterest
Labels: African Film Festival (New York), Through African Eyes: Conversations with the Directors Volume 2

Sisters of the Screen: Reflections on a Decade

How is African cinema visualized, described, experienced, theorized, and interpreted by the women who circulate, navigate, and negotiate in the diverse areas of this world?  Is there a woman's sensibility, a female imaginary, a woman's visual text, a female gaze?  Who are their models, their references?  What are the specificities of their experiences in cinema?  What are their struggles, accomplishments, goals, and objectives?  What are African representations of female subjectivity? These were the questions that I sought to answer.

"African women in the cinema" is not a monolith; the disparate technologies, locations, and conditions in which African women work attest to this. Nonetheless, women from every region of Africa use the diverse mediums of the moving image to produce feature, short, documentary, animation and télé films, that are shown in movie houses, at film festivals, cultural centers, on television and the Internet. While they come to cinema along different paths, for different reasons, and at different moments, they share a common goal: to bring images to the screen. The Sisters of the Screen Project covered a continuum of experiences: from the pioneer women to women film students who were making their debut in the film arena. Producers, film critics, and organizers are an integral part of the filmmaking process and their perspectives added an important dialogue to the conversation. Actors, the visible subjects on the screen, voiced their thoughts about African cinema and their role in the larger context of visual representation, culture, and society.

The conversations reflect the wide spectrum of voices that shape the cinema of African women. Some shared stories of their journey along the path to cinema, others shared personal feelings around identity and its influence on their work. Some focused on the themes of their work, spanning the personal to the political. Their films probed intimate and personal issues around sexuality, women's responses to male infidelity, conjugal violence, and arranged marriages. The films also examined societal laws and statutes that deny women's personal, legal, and human rights. They probed broader political concerns of democracy and free elections, and the consequences of civil war and its devastating effect on women and children. Some women talked about their direct involvement in national liberation struggles and the importance of raising consciousness around AIDS and other health issues, as well as women's literacy and education. Still others contemplated their role as communicator and catalyst for change, stressing the need for women to organize among themselves and come together as a collective body to realize their objectives. As their diverse experiences converged under their common interest in cinema, the thread that wove their voices together was their commitment to visualizing their stories.
Fast forward: if one were to judge from the flurry of initiatives focusing on African women in cinema since the late 1980s it would seem that they have finally secured a visible position in the 7th art. And yet, film production, distribution and exhibition of films by African women remain a challenge; meetings and published documentation continue to be sporadic. If the life span of the FEPACI-sponsored Ecrans d’Afrique (1991-1998) is an indication of the possibility of a Pan-African critique of cinema, a closer look must be made. The future? I offer prospects since the decade of new technologies. While the organizing efforts of African women in the cinema remain modest, due to the vast resources needed to sustain such a project, the die has been cast.  The Internet has become an important tool: websites and blogs, social networking, video sharing, language translation tools and infinite other possibilities. Moreover, the fledgling African Women Cinema Movement is taking shape. Film distributors are expressing increasing interest in acquiring films by African women. Festivals and conferences devote categories for African women's films. University course syllabi include films by and articles about African women in the cinema, and in more and more cases entire courses or seminars are being created. University theses and extensive research projects on African women in the cinema are increasingly visible. All are collectively contributing to an African Women Cinema Studies.

At the time, the title “sisters of the screen" provoked a kindred spirit among women where the screen was their ultimate point of convergence.  On the screen is where their images are read—a movie screen, television screen, video screen or computer screen.  Whether as director, producer, film festival organizer, actor, or critic—that space, the screen, is the ultimate site from which the moving image is viewed, interpreted, understood. The notion of cinema as the feature film projected on a big screen viewed by large audiences in cinema houses is no longer the reality in the age of new media, video on demand, video streaming. And thus, African women have positioned themselves to take full advantage of the global screen culture that has emerged during the first decade of the 21st century, and with it the technological, social and cultural transformation and evolution that this will bring.

Parts of the text are drawn from the Preface of Sisters of the Screen: Women of Africa on Film, Video and Television. Sara Gubara’s extraordinary story of perseverance and resolve begins early as a young child. The daughter-father triumph over many obstacles and challenges spans the lifetime of Gadalla Gubara who died in 2008, and continues today as Sara carries the torch of his dreams. At three years old, young Sara was stricken with polio, the family facing the bleak diagnosis that nothing could be done. Gadalla does not accept this fate, devoting himself to his daughter’s recovery. She was encouraged to swim and at twelve years old competes internationally. Moved by Sara’s incredible accomplishment, Gadalla made the documentary Viva Sara, which would later inspire the fiction film Sarahsarà (1994) by Renzo Martinelli.

Sara’s film The Lover of Light (2004) is both a metaphor of Gadalla Gubara and of his interest in bringing social issues to light through filmmaking. Taking the torch of her father, Sara is determined to keep filmmaking alive in Sudan: “I love cinema and because of my father—I think he is a brave man to own a studio in Sudan—I don’t want this to die.”

Their last work, Les Miserables, a Sudanese adaptation of the Victor Hugo classic, produced in 2004, is a tribute to the enormous struggle of the Sudanese people against injustice and poverty. The film is about a desperately poor man who commits a minor theft and is punished without compassion: “I brought my daughter, she read the scenario to me, she understood the scenes and she became the director of the film “Les Miserables”. I consider my daughter a part of me, she understands me very much."

Short interview of Sara Gubara by Arsenal-berlin.de
Posted by Beti Ellerson at 17:13 No comments:
Email ThisBlogThis!Share to TwitterShare to FacebookShare to Pinterest
Labels: Sara Gubara, Sudan 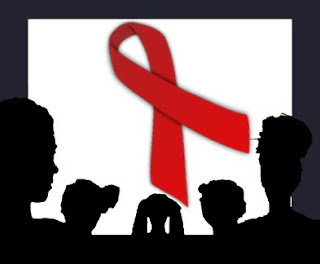 African Women in Cinema have long used film as a means to raise consciousness about diverse issues related to their communities and the continent as a whole.
Fanta Nacro (Burkina Faso) has been at the forefront in this regard, utilizing cinema to confront the AIDS crisis in Africa, producing documentary films such as, En parler ça aide (2002); Vivre positivement (2003), Never Alone, A Call to Action, No Time to Drop Your Guard, and an impressive collection of films produced for Scenarios from Africa/Scenarios d'Afrique (2003-2004): A Call to Action, A Love Story, A Ring on Her Finger, The Champion, Iron Will, Peace of Mind, Never Alone, The Reasons for a Smile, Tiger Tigress. In the same Scenarios from Africa series, Looking for a Brave Man by Kidi Bebey (Cameroon) explores relationships in the age of AIDS. A young woman seeking a serious relationship, insists that her partner act responsibly and be willing to take the AIDS test. Le Truc de Konate (Konate's Thing), 1998), a humorous short fiction film by Nacro was very popular with the audiences in Burkina Faso. The film blends traditional skepticism of new ideas, masculine virility and honor, and emerging female consciousness.
On a more somber note Zimbabwean Tsitsi Dangarembga's Everyone's Child (1995) deals with the daunting consequences for the children who are left to fend for themselves when their parents die from the devastating affects of AIDS. Similiarly, one of the themes in Musola Cathrine Kaseketi's film Suwi recounts the tender story of the young Bupe, who in the end finds a happy home. Tumaini by Beatrix Mugishagwe (Tanzania) is also a tale of hope.
Kenyan Wajuhi Kamau, who works in the Film Production Department of the Educational Media Service of the Minister of Education, emphasizes the effectiveness of video as a means of educating people about issues from AIDS to family planning. Using both the documentary and drama presentations, the objective of the Educational Media Service is to take the results to the people who then see themselves reflected in the images, "when you see yourself, you see your situation, then it is easy to remember and change attitudes and behavior." Zimbabwean Prudence Uriri focuses on issues related to AIDS and health in general. Madizela and Samora (2003) commissioned by UNESCO and Life (2002), produced by Rooftop Promotions were two AIDS-focused films made by Uriri. In her role as filmmaker, she sees the importance of opening a dialogue about the problems that people face so that they may be better informed of the situation.
Looking for a Brave Man by Kidi Bebey

A Love Story by Fanta Nacro

Link to other films by Fanta Nacro in the Scenario for Africa Series
Some parts of this text were published in the 30 November 2009 post: A Call to Action: UN Themes and African Women in Cinema.
Posted by Beti Ellerson at 23:56 No comments:
Email ThisBlogThis!Share to TwitterShare to FacebookShare to Pinterest
Labels: AIDS and Cinema
Newer Posts Older Posts Home