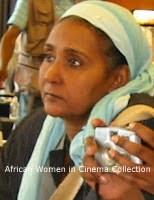 Sara Gubara’s extraordinary story of perseverance and resolve begins early as a young child. The daughter-father triumph over many obstacles and challenges spans the lifetime of Gadalla Gubara who died in 2008, and continues today as Sara carries the torch of his dreams. At three years old, young Sara was stricken with polio, the family facing the bleak diagnosis that nothing could be done. Gadalla does not accept this fate, devoting himself to his daughter’s recovery. She was encouraged to swim and at twelve years old competes internationally. Moved by Sara’s incredible accomplishment, Gadalla made the documentary Viva Sara, which would later inspire the fiction film Sarahsarà (1994) by Renzo Martinelli.

Sara’s film The Lover of Light (2004) is both a metaphor of Gadalla Gubara and of his interest in bringing social issues to light through filmmaking. Taking the torch of her father, Sara is determined to keep filmmaking alive in Sudan: “I love cinema and because of my father—I think he is a brave man to own a studio in Sudan—I don’t want this to die.”

Their last work, Les Miserables, a Sudanese adaptation of the Victor Hugo classic, produced in 2004, is a tribute to the enormous struggle of the Sudanese people against injustice and poverty. The film is about a desperately poor man who commits a minor theft and is punished without compassion: “I brought my daughter, she read the scenario to me, she understood the scenes and she became the director of the film “Les Miserables”. I consider my daughter a part of me, she understands me very much."

Short interview of Sara Gubara by Arsenal-berlin.de
Posted by Beti Ellerson at 17:13