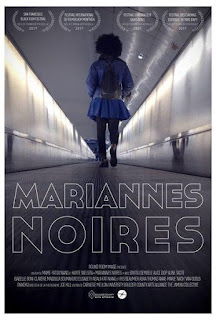 Recent violence and growing nationalism in France have brought fierce debates about the country’s identity to the forefront. In Mariannes noires, seven different French-born women of African descent confront their own unique identities and challenge the expectations of French society. In this documentary, they take us through their battles and retrace their most grueling paths in order to understand the social confines that have affected them professionally, psychologically, and emotionally. They share their ideas and solutions to France’s most daunting issues at the heavy intersection of racism and misogyny, and they bravely lead the way forward.

Posted by Beti Ellerson at 05:38 No comments:
Email ThisBlogThis!Share to TwitterShare to FacebookShare to Pinterest
Labels: France-Diaspora, Identities 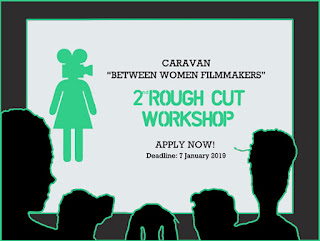 The Rough-Cut Workshop is an audiovisual consultation offered to women filmmakers who are in the phase of working on the first rough-cut of their cinematographic work and need support regarding the content and the development of their film on an artistic and editing level.

Six Arab women filmmakers working on the rough-cut of their films, will be selected. The workshop will allow them to engage in discussions of each other’s audiovisual works and to debate its different elements. They will also be discussing their works with an international jury made up of film critics, directors and editors.

The festival will cover the travel and accommodation expenses of the selected filmmakers. 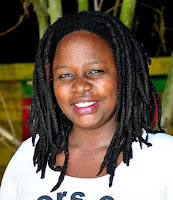 (Re)Discover Claudine Ndimbira
Updated to include: Profile of Claudine Ndimbira from Women's Voices Now
Ndimbira Claudine (Shenge Intare) is a young Rwandan female filmmaker residing in Kigali. At the age of 15, she began writing stories. In 2012, she began taking short courses in digital film making at the Kwetu Film Institute after high school. In March 2013, she participated in the animation workshop at the Luxor International Film Festival. In July 2013 she wrote and directed her first short film called “My mother, My hero” in a workshop called Girls Make Movies, during the Rwanda Film Festival.
From March-August 2014, as coordinator for the short film project “Shed Light on Your Rights,” she produced two fiction films, “Impuruza” and “She,” and directed another film called “SHE.” Ndimbira has participated in several workshops by the Europäisches Filmzentrum Babelsberg (EFB) in partnership with Kwetu Film Institute, where she directed her first short documentary Hora Mama.
Hora Mama was inspired by the complex reality for poor mothers. A mother can care so deeply about her daughter that she prostitutes herself. A mother can thrive in a life that she does not want her children to live. A mother can be broken but never cry. Ndimbira has developed a relationship with Mahoro, the mother in “Hora Mama,” and finds that the story of her struggle has forever affected her understanding of reality for women. The film may be viewed at: https://www.womensvoicesnow.org/films/hora-mama-dont-cry-mother
Source: https://www.womensvoicesnow.org/films/hora-mama-dont-cry-mother
Image: Maisha Lab
Claudine Ndimbira's experimental documentary Lend Me Your Voice, was released in 2022. Excerpt of the description of the film: In this intimate documentary essay, the director Claudine Ndimbira had the young woman tell her testimony through a group of readers. These men and women who know neither Akili nor her past, but they will develop with her, over the course of reading her story, a deep bond of empathy.
This article was originally posted as:
Claudine Ndimbira : Support her film project “Living like a shadow” about the LGBTQ community in Rwanda

Claudine Ndimbira had this to say about the film project:
With this project “Living like a shadow” I want to give the voice to LGBTQ community members in Rwanda to tell their stories, what they have been through, what they wish their lives could be but also to the society so that they say what is the reason why they think being gay is a problem to them.
Source: http://creativerwanda.com/interview-with-ndimbira-claudine-shenge/ NO LONGER ACTIVE

Synopsis
“Living like a shadow” is a 90 minutes film that will follow the lives of 3 characters. Even if some have similar issues or experiences – like living a double love life due to what the society expects from them or being judged often, each one of them has a unique story.

Excerpt from Director’s Statement
I want to make this film to shed light on that issue so that it can start a conversation. People fear what they don’t understand or what they refuse to understand but at the end of the day the solution is to talk about it and react positively.
Posted by Beti Ellerson at 09:35 No comments:
Email ThisBlogThis!Share to TwitterShare to FacebookShare to Pinterest
Labels: Claudine Ndimbira, Rwanda
Newer Posts Older Posts Home