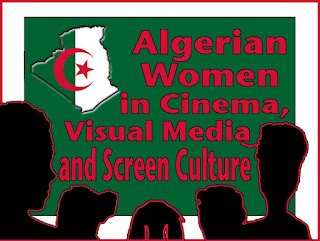 Algerian Women in Cinema, Visual Media and Screen Culture
Algerian women’s cinematic trajectory navigates the country, the African continent, the Arab world, and its eclectic diaspora. It focuses its lenses on women's stories, on social political issues, on liberation struggles, on Islamist fundamentalism, on censorship, and on the everyday lives of its people, among other themes.
Baya El Hachemi, journalist and artist, directed the television series Visages de femmes (Faces of women) from 1975 to 1977 and Le Citoyen face à la justice (The citizen confronts justice) from 1983 to 1989; also in the 1980s, Farida Belghoul directed two films. The 1990s witnessed an abundance of film productions by Yamina Bachir Chouikh, Fejria Deliba, Rachida Krim, Zaïda Ghorab-Volta, Fatma Zohra Zamoun, Nadia Cherabi, Hafsa Zinaï Koudil, Sarah Taouss-Matton, Djamila Sahraoui--whose film, Yema, received the Silver Yennenga at Fespaco in 2013. French-born filmmaker and cultural activist Yamina Benguigui is internationally known for her social-political engagement on Algerian immigration issues in France. In addition, she served as Minister of the Francophonie in the French government. The 2000s were equally prolific with films by established filmmakers as well as debut works by Laurette Mokrani, Yasmina Adi and Nassima Guessoum.
The feminist activist Assia Djebar (1936–2015), internationally acclaimed writer and immortelle of the French Academy, was also a filmmaker, directing La Nouba des Femmes du Mont Chenoua in 1978 and La Zerda ou les chants de l'oubli in 1982. In an interview she stated this as the reason for taking up the camera: “I realized that the woman was forbidden any relationship to the image. While her image cannot be taken, she does not own it either. Since she is shut away, she looks on the inside. She can only look at the outside if she is veiled, and then, only with one eye. I decided then, that I would make of my camera this eye of the veiled woman.” (My translation from French). Hence Assia Djebar felt a duty to give visual representation to those who were prohibited from doing so. In addition, she was professor of history and French literature and cinema at the University of Alger, and in the United States, served as director of the Centre for French and Francophone literatures at the University of Baton Rouge in Louisiana and was professor of Francophone literature at New York University. During that time she played an important role in developing Francophone curricula in the United States. She had this to say about Algerian women and écriture in French: “In response to the fundamentalist violence of the 1990s there is a growing body of feminist Francophone writing that radiates from Algeria to Europe and the Middle East. Women writers use the French language to resist widespread misogyny, narrow conceptions of identity and retrograde socio-political movements. Writing in exile becomes, for some of these women, a real form of survival.”
Like Assia Djebar, Horria Saïhi is a feminist and activist using myriad mediums of communication to address social and political issues. She is perhaps best known for her indefatigable work as journalist, reporter, and filmmaker against government censorship and religious fundamentalism. In the 1990s as a politically committed radio and television journalist she journeyed a perilous path to document witnesses giving testimony to the atrocities of Islamic fundamentalism whose sole objective was to wipe out all cultural activities. As a result of death threats she was forced into exile in France. Describing the conditions of her work during that time: “When we live in a situation of almost perpetual war, you can understand what the difficulties are like for us to go on location and try to make a film, because of the insecurity. The armed Islamists and fundamentalists groups are there to prevent life and cultural development, and so, cinema is prohibited, painting and music are forbidden. Even if we are able to make films, the exhibition of these films is impossible. We cannot have people come to see a film with this insecurity.”
Horria Saïhi’s work earned her the International Women’s Media Foundation Courage in Journalism Award (New York) in 1995. She received the award in the name of the Algerian people; she had this to say about her acceptance of the prize:

I dedicated the award to two women, the women who have marked my life. One was a very good friend, a colleague and journalist, Rachida Hammadi who was assassinated by terrorist fundamentalists. She was of such fragility. She was not tall, only 4m75 | 4’9, and frail, but of a courageous and implacable will. She was always busy and constantly in the field. You could always hear her saying "I was told that such and such a thing has just happened, we must go there." She never said that she was tired. This woman symbolized this courage for me. It is not me who was awarded this prize, it was Algeria, it was these women who continued to remain standing, who carried Algeria in their two arms.
I dedicated it to another woman who I met in a region that has suffered tremendously, Jijel. It is a zone that has a reputation for being the stronghold of fundamentalist terrorists. There I met a marvelous woman. I say marvelous because, having come from a big city, we only meet intellectual women who are well-read, articulate, who are able to say what they think. But these women, we do not meet outside in the streets. Moreover, the press, the television, the cinema are interested in women who are very present before the camera, who are mediatized by the national and international press.
However, this woman was in the countryside, she cultivated the land, she participated in the national liberation war in the capacity of a fighter. During the last nine months of the war she was pregnant. Thus, she was at the same time fighter and mother. And this woman brought into the world, the day of independence 5 July 1962, a child who she called Abdullah. Abdullah means the child of God, the creation of God. She could have died with the child in her womb, and yet she carried him right up until independence and brought him into the world. This child's mother, who was not literate, wanted to give him a good education--a sort of payback for her--so that he could be intelligent and go to the best schools and universities. And her son was assassinated by the terrorists. This woman took up arms again, not to avenge her son in a feudal manner, but to avenge him by continuing the fight, so that there will never be blood in our country again.

Unable to show her films, she wrote a book entitled Voix sans voile (Voice without veil), released in 2016, compiling the voices of the many experiences that Algerians had to endure during that dark period of the 1990s.
Hence, using the veil as metaphor, through the moving image and literature, Algerian women give voice to the untold stories of women.

Report by Beti Ellerson
Links to articles on the African Women in Cinema Blog: