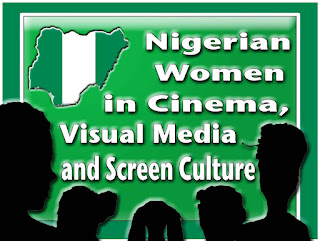 Nigerian Women in Cinema, Visual Media and Screen Culture
…representations set the pace for reading women in particular societies
--Agatha Ukata, scholar
Before the emergence of the “Nollywood” phenomenon in the 1990s, Nigerian women of the moving image were already visible in the country, the diaspora and internationally. Pioneering film practitioner Amaka Igwe (1963-2014) recalls being immersed in the weekly episodes of Mirror in the Sun a television soap opera created by Lola Fani-Kayode in 1984. Hence, Lola Fani-Kayode paved the way for Amaka Igwe’s popular soap opera Checkmate of the 1990s, which propelled her to national renown, setting the standard for Nollywood productions that followed. In addition, Igwe founded the BOBTV (Best of the Best TV), a film and television program market held annually in Abuja. Debrah Ogazuma, another early presence among women, was a senior producer at the Nigerian Television Authority. In addition to her research on Nigerian women in film and television, she directed and produced the weekly television series Magana Jari Ce from 1989 to 1990. Moreover, Emem Isong is among an increasingly long list of women who are making important contributions to the ever-expanding screen cultures of Nigeria. In addition to her role as director and producer, she was director of the Royal Arts Academy acting school and training academy.

Women of the Nigerian diaspora have also told their stories, reflecting their personal experiences as well as events related to their social position within the diaspora. U.S.-based Ruby Bell-Gam, British-Nigerian Ngozi Onwurah, and Nigeria-born Branwen Okpako who navigates the diasporas of the U.S. and Europe—were film practitioners who emerged in the 1980s and 1990s. Omah Diegu (Ijeoma Iloputaife), who began film studies in the United States in the late 1970s, was among a cohort of film students of color at the University of California in Los Angeles (UCLA) whose work evolved from what has been called the L.A. Rebellion film movement, its mission to disrupt the dominant gaze of Hollywood.

Agatha Ukata’s 2010 doctoral thesis from the University of the Witwatersrand in Johannesburg, “The Image(s) of Women in Nigerian (Nollywood) Videos,” traces the Nollywood phenomenon that would spread across Nigeria, the continent and beyond, at the end of the twentieth century and attests to the importance of critiquing the representation of women in this immense enterprise. Similarly, other works have examined women’s roles in Nollywood, as industry professionals and image-makers. Peace Anyiam-Osigwe, founder of the African Movie Academy Award, has been dubbed the Nollywood Lady in the film of the same name. In Amaka’s Kin (2016), filmmaker Tope Oshin Ogun turns to Amaka Igwe to pay tribute to her legacy, featuring some of the prominent women filmmakers in the Nollywood tradition.

In addition, Ema Edosio focuses her camera on the myriad worlds of life in Lagos: "as an African filmmaker I tell my own version of my feelings through my stories and characters. [The film] Kasala! is a reflection of my environment, my life existing in Nigeria." Through comedy Omoni Oboli and Kathryn Fasega examine the myriad experiences of love, family, and success.  Adeniran uses animation cinema to explore memories and family. LowlaDee" Adeleke Sade strong presence on social media is indicative of her interest in taking full advantage of the dominant role of digital technology to reach audiences worldwide.

The countless Nigerian-based cinema-focused initiatives are indicative of the ubiquitous role of screen cultures in the country. Entertainment executive Chioma Ude founded the Nigeria-based Africa International Film Festival in 2010 and envisions it as a platform for training and the development and monetization of content for the public. Adaobi Obiegbosi's vision encompassed the continent as a whole through the creation of a festival for African student filmmakers as a continental platform to share their works and ideas.

The cinematic stories from the Nigerian Diasporas of the United Kingdom and the United States, draw both from direct experiences in the country as well as Diasporic themes of belonging, inclusion and duality.

Nigerian-American Yvonne Orji represents a growing number of first-generationals born of immigrant parents who want to tell their hybrid-identity story of being born and/or raised outside of Africa, often living in the West between two cultures. She uses comedy to tell these immigrant experiences in the United States. Nigerian-American Nneka Onuorah puts the spotlight on lesbian identities in her film The Same Difference. Chinonye Chukwu, born in Nigeria and raised in Alaska, became the first black woman to receive the Grand Jury Prize at Sundance. She is the founder of Pens to Pictures, a filmmaking collaborative that teaches and empowers incarcerated women to make their own short films, from script to screen. U.S.-based cultural producer Mojisola Sonoiki, emphasizes the importance as an African to reach out to other Africans and support their work: "We are a marginalised group in the context of world politics, or anything else within the global context really, so the more we can support each other, the more our voices will be heard, our stories told and our problems solved." Similarly, Nigerian-American Vigil Chimé, drawing from her transnational identity, endeavors to show realistic images of the African immigrant experience in the United States. Born in the United States of Nigerian and Mauritian parentage, Zuriel Oduwole describes herself as a Pan African child. In 2016, she began her filmmaking journey as as 14-year-old teen. Her goal is to use her programme, Dream Up, Speak, Up, Stand Up, to inspire girls to accomplish their dreams as she has been able to do, and to ensure that every girl gets an education. Moreover, she wants to use the visibility that she has attained in order to present positive images of Africa, those that tell real African stories.

British-Nigerian Remi Vaughan-Richards born of a Nigerian mother and father British, is "a child of two cultures and…embrace[s] both cultures equally", producing documentaries and films "that try to impact change or highlight an issue." Ebele Okoye grew up in southeastern Nigeria where, like many African filmmakers, oral storytelling was the collective experience of the society. She yearned to share these stories, recounted around the fire, under the moonlight, and it was through the medium of animation filmmaking that she fulfilled that dream. Because of the dearth of film schools in Nigeria at that time, she went to Germany to study 2D Cartoon Animation at the International Film School Cologne. Upon completion, she worked as studio animator and director/producer of her own short films. For The Legacy of Rubies (2015) project she partnered with the Nigerian animation production studio Shrinkfish Ltd, the producers of the film. Nigerian-born Branwen Okpako "locates herself where she is geographically and spiritually: "My films are my witness to life as I see it. It is a great honour to be able to make films so I use every opportunity seriously. It takes so long to gather and order experience and then to translate what one has learned into a piece of work to share with others…".

The African Women in Cinema Blog endeavors to present the myriad screen experiences of Nigeria. While not claiming by any means to be exhaustive, as the country's activities are expansive, the Blog presents a small selection of voices that are indicative of the diverse and wide-ranging screen cultures of Nigeria and its Diaspora.
Report by Beti Ellerson

Amaka's Kin - The Women Of Nollywood, a documentary by Tope Oshin
https://africanwomenincinema.blogspot.com/2016/07/amakas-kin-women-of-nollywood.html

Nneka Onuorah and her film “The Same Difference” during Women’s History Month
https://africanwomenincinema.blogspot.com/2016/03/the-african-women-in-cinema-blog.html

British-Nigerian Remi Vaughan-Richards talks about “Faaji Agba”, her passion for cinema, and the two cultures she embraces
https://africanwomenincinema.blogspot.com/2015/10/british-nigerian-remi-vaughan-richards.html

The Legacy of Rubies, an animation film by Ebele Okoye
https://africanwomenincinema.blogspot.com/2014/12/the-legacy-of-rubies-animation-film-by.html

Mojisola Sonoiki: The Women of Color Arts & Film Festival is "my destiny"
https://africanwomenincinema.blogspot.com/2012/02/mojisola-sonoiki-women-of-color-arts.html

Proceedings from the African Women in Film Forum (Nigeria)
https://africanwomenincinema.blogspot.com/2010/07/proceedings-from-african-women-in-film.html

Women in Film Forum : Nollywood and the Dynamics of Representation
https://africanwomenincinema.blogspot.com/2010/06/women-in-film-forum-nollywood-and.html
Posted by Beti Ellerson at 02:50