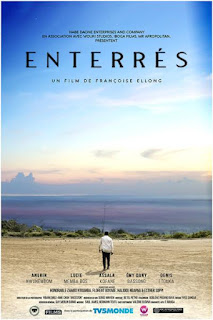 Dangerous links between religion and believers
The second dramatic feature film by the Cameroonian director marks her presence in festivals and airline entertainment with a courageous and transversal discourse on pedophilia in religious circles.

A high-angle shot following a taxi on an unpaved road. The movements of the drone sweep over the vegetation, village dwellings lined up on both sides of an apparently dead-end road. It is through this journey that Françoise Ellong invites the viewer to be part of this 88-minute adventure, which from the start reveals elements of uncertainty, of doubts and of an impasse. The little yellow car unloads its passengers at the crossroads of a village. A place that reflects as much the complexity of the characters and the situations they will go through as the uncertainty of a flourishing future. Which path to take? The question that seems to arise in the first scenes of the film will remain in the background, only to reappear at the end.

It is the journey of a lifetime, in fact, that Buried tells, at a unique site and with unique characters. It is the tumultuous and painful course of three decades that Ndewa’s group wants to exorcise. After her first feature film Waka, Françoise Ellong is slowly returning to the huit clos. The enclosed-setting genre for which she has a particular fondness. Here, we experience the insight of the director who gains in maturity throughout her film productions.

The exact casting, accompanied by an ideal setting, transports the viewer through the orphanage where the group lived more than two decades before. The lighting quality combined with the right make-up and costumes adheres to the development of this dark day. Also, we get to know Daddy, Sister Catherine, Sister Thérèse, invisible characters who have forever impacted the lives of our five protagonists. A polished language, dialogue and refined lines are a distinctive asset--while providing an understanding of the horror: a childhood and adolescence hindered by sexual abuse, the terror of a religious environment that is supposed to provide love and security. Ellong, who also authored the screenplay, brings up a subject that is as socially weighty as it is emotional--without any scenes with the perpetrators, no flashbacks, with a tone that is meant to be universal, without details of the filming location or of the orphanage.

Everything is in the story, the staging, the setting, and to a lesser extent the music--which punctuates the intense intimate moments. Anurin Nwunembom (discovered in Nyna’s Dowry) whose superb embodiment of Ndewa, leads the event to which he invited his former companions. A few twists in its rendering in French--because of the expression in English--did not spoil the outcome. Ndewa, a complex and mysterious character receives rejoinders from Lucie Memba (Marie)--whose acting becomes increasingly essential in local productions; Emy Dany Bessong (Agnès) accustomed to the series genre, makes a remarkable entrance in cinema with the film Buried.

In her latest fiction (released at the end of 2019 and produced by Nabe-Daone Enterprises), Françoise Ellong contemplates a discourse that tests faith by questioning the Bible and religion. "Being a pastor is a profession" ... "People use and abuse the Bible", behavior that exasperates Hassane (Assala Kofane). Reuniting "friends" on the day of the funeral of the dreaded Daddy, was for Ndewa the last hope of breaking with this bitter and secreted past. Which has nonetheless left deep scars obscuring his own future and that of his friends. And to add to the intensity of the drama: the sudden appearance of Minyem (Denis Etouka) and his even more disturbing revelations about the complicity of certain members. Burying certain objects is the rule of this dangerous game, but instead it has served as an unearthing of a past full of demons.