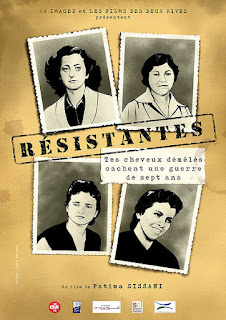 The film is an intersecting perspective of three politically engaged women on the side of the FLN, it is about colonization, and the Algerian war of independence. These women will come to know the underground, prison, torture, the psychiatric hospital. After decades of silence, it is at the twilight of their lives that they choose to testify.

With clarity and modesty, they tell the story of colonial Algeria, segregation, racism, anti-semitism, prison, torture, solidarity, freedom, and too, the invigorating nature, soothing landscapes, music and poetry that provides an escape ... 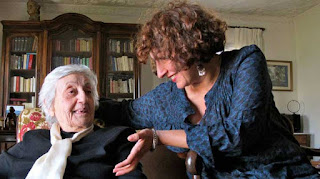 It is a film that addresses the theme of resistance. I interviewed three women, including Eveline Safir Lavalette, who went against the dominant attitudes with which she grew up, since she belonged to the colonial society. So she ruptured with her family, her social class, her community, for the cause of her struggle. I think it is a sublime act.

Zulikha Bekaddour, she became politically engaged in the 50s, at a time when society was very conservative, where a woman's place was extremely restricted. In fact, when she went to the maquis, she had to first ask permission from her mother.

As for Alice Cherki, she was in a slightly more complex position as a Jew in Algeria. As they were French citizens, they had a rather distinctive status, which was also ambiguous. She, too, went against the grain of what was expected of her.

Then, of course, the film deals with colonization. The people who lived it are now growing old and there are very few oral testimonies on this period in cinema. On the other hand, I made this film from my position as a child of immigrants, who grew up in France, where there is a negation of colonial crimes and the legitimacy of the Algerian War. This documentary touches on a small aspect of this history, but it seemed to me very important to do so, in order to oppose the rampant negationism and revisionism that prevail in French society.

So I echoed my own story when making this film--with a lot of silences, the unsaid, things impossible to tell. Many taboos persist around colonization and the struggle for independence.

I think these stories are important to many people of my generation. We need to hear about resistance to oppression. The resources to lead the struggle today, against the profound inequality of the capitalist system, are also found in these narratives. Currently, millions of people are fleeing their country to settle in Europe. They face many obstacles as they risk their lives, only to find themselves confronted with a society that does not want to welcome them. What does one do with this reality, when one has legal residency, a job, a home? One can deflect it, and live tranquilly, even within the same society that has chosen to ignore them, at best, or at worst that stifles them.

Moreover, for me, a child of Algerian immigration, these stories allowed me to give those like myself a place in the great history of the resistance. Our parents have been treated as starving illiterate people. Algerians are never described as resisters. If that had been the case, I am certain, that our narrative would have been constructed differently in this country. That is what I think is happening in this film.

As far as women are concerned, it is true that all my documentary films have privileged their voices. It is for me, to fight against their invisibility in the space and the public debate. Why is the question asked systematically "what was the role of Algerian women during the Algerian War?" We never ask that question regarding men! So I did not want to introduce both at the risk that the voices of men become dominant. I am convinced that the arrangement of single-gender spaces makes it possible to measure the place of the dominated in a struggle.