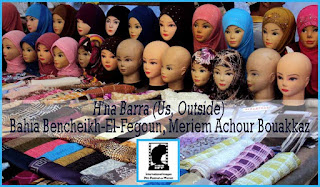 A male public space, women’s bodies that disturb.
Neither men nor women know what to do with this female body, so it gets veiled.

This film is the encounter between women in a quest for meaning who question themselves to confront their individual histories.

Who are they today faced with a society rife with confusion that “does not know what to do” as they are present in ever greater numbers in this public space?

A society permeated by religious convictions on the one hand and by ignorance on the other that makes women a permanent target.

Bahia Bencheikh El-Fegoun
Geologist by training, she started in cinema as assistant director. In 2007, she enrolled in courses in editing followed by film directing. She has made three documentary short films, including C'est à Constantine, which was selected in several festivals and received a special mention from the jury at Ciné Sud.

Meriem Achour Bouakkaz
She studied veterinary medicine and in 2007 directed her first film Harguineharguine, which won several awards, including the first prize at the festival Ciné Sud. She is studying documentary film production in Canada.