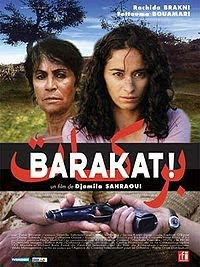 Since its premiere at the Berlin International Film Festival in 2006, Djamila Sahraoui's Barakat! has traveled the world with much enthusiasm from its audiences. Also featured at the Dubai International Film Festival in 2006, it won the Muhr Awards for Best Arab Feature Film. In 2007, Barakat! grabbed several prizes at FESPACO, the Panafrican Film and Television Festival of Ouagadougou: the Oumarou Ganda Award for the Best First Work, the award for Best Music and the award for Best Screenplay. The same year the film showed at the Mostra de Cinema Àrab i Mediterrani de Catalunya in Barcelona. In 2008, the film was screened at African in Motion, the Edinburgh African Film Festival. The next year it was presented at Cannes: Pavillon "les Cinémas du Monde". Presently Barakat! is screening at the Women of the Sun Film Festival in Johannesburg in the presence of Djamila Sahraoui.

Set in wartorn Algeria in the 1990s, Barakat! follows two women's dangerous search for the younger woman's husband, a journalist whose writings resulted in his disappearance. Both women represent anachronisms in Islamist Algeria the younger woman, Amel, is a doctor. The older, Khadija, is a nurse with vivid memories of Algeria's fight for independence.

Ignoring curfews and facing the constant threat of ambush by armed militias, the two women challenge the men they encounter to accept them and help them with their search. Their journey leads them across the picturesque landscapes of Algeria, to a deeper understanding of how their lives were shaped by their country's history.

Trailer translation from French to English by Beti Ellerson

Excuse me, my husband has disappeared

Barakat, the journalist, where is he?

I don't know if they killed him,
or if they are the killers.

My child,
listen to what I tell you.

I am going to find him by myself.

Okay go find him by yourself!

Repeat it, now!
Repeat it!