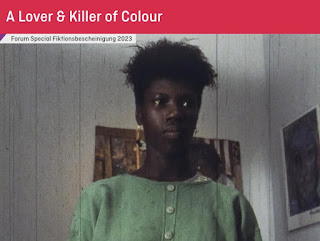 Wanjiru Kinyanjui has been fascinated with storytelling since she was a young girl, her imagination visualizing the stories that she read. It is not surprising that her passion brought her to the doorstep of the Deutsche Film und Fernsehakademie, the German film school where she could "plunge into a world full of characters and their stories." She had this to say about her experiences there:

The film school was definitely a great opportunity for me because we had no theoretical exams. Our papers were actual films and we could, therefore, experiment on each film we made after every seminar or workshop. Some cinemas in Berlin provided us with free tickets and it was possible for us to watch as many different films as we had time for. I could choose my own subjects, my own format, and the people I would work with. In a way, it was a freeing experience. (Excerpt of interview from Sisters of the Screen by Beti Ellerson)

A Lover & Killer of Colour

“I strike with the brush until the white canvas tears.” Wanjiru Kinyanjui’s fiction short about a Black painter in West Berlin was shot on 16mm and draws its power from its atmospheric night scenes and self-confident stream of consciousness.

The Battle of the Sacred Tree

Mumbi leaves Nairobi for her ancestral village and gets into a quarrel with a Christian women’s group seeking to eradicate the remains of pre-colonial belief systems. Wanjiru Kinyanjui graduated from the DFFB with this smart comedy shot in Kenya.