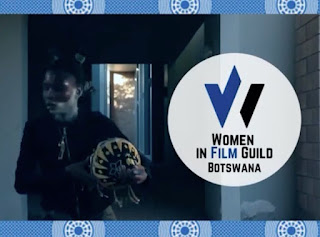 Women in Film Botswana
From the Women in Film Botswana YouTube Page
Introducing: Women in Film Botswana
The Women in Film Guild of Botswana is a society that assists, educates and empowers women in the film and television spaces of Botswana. Our journey has only just begun, so do visit us @wifbotswana on our social media platforms to keep up with us and support. Let's tell our stories, ourselves.
wifbotswana@gmail.com
Published: 09 January 2023
https://www.youtube.com/watch?v=pmxa41EjSHs
***
Serena and Nikita - are currently raising funds for an incredible opportunity that they’ve worked so very hard
for, and are working even harder to make a reality: Attending the 2023 Cannes Film Festival on behalf of a guild they founded, Women in Film Botswana (WIF Botswana). They are the beneficiaries of this campaign, and here is their story. 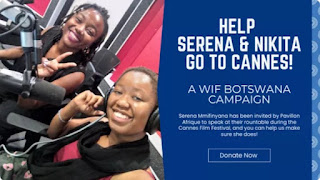 Serena and Nikita, Chair and Vice-Chair of WIF Botswana, founded the guild in 2021 and have been working non-stop to build a strong foundation for it to grow. From around mid-2022, their efforts were noted and Serena was elected onto the Board of Directors for Women in Film & Television International (WIFTI), an incredible achievement and a first for Botswana. Shortly after, Pavillon Afriques approached her and invited her to speak at their roundtable during the Cannes Film Festival! Serena will speak, and Nikita will accompany her to assist with networking for the guild. They could hardly believe it and immediately began seeking help and advice on how best to raise funds and prepare for this trip.
https://www.gofundme.com/f/help-serena-and-nikita-go-to-cannes
Posted by Beti Ellerson at 06:53
Email ThisBlogThis!Share to TwitterShare to FacebookShare to Pinterest
Labels: Botswana