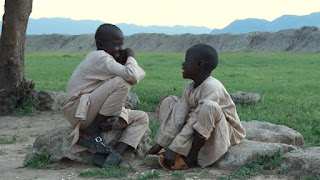 There have been attacks by the terrorist group Boko Haram in the village of Kolofata, in the Far North of Cameroon since 2013. Even though infrequent at the present, the threat remains real; omnipresent. In this post-apocalyptic universe, a group of children in the Preparatory Course adapts to the situation, reinventing themselves by juggling between Western and Koranic studies, and the immense household and rural tasks that fall upon them. Even while meeting the challenge when things get really serious, they always find time between chores to have fun.

The main characters of this tragedy: Falta, Ladji, Ibrahim, Mohammed, Ismaela and Maloum. They are between the ages of 4 and 11 years old, energetic and always in perpetual motion, as they forge their place in a society where parental figures are disappearing. Falta and Ladj are brother and sister. Through frightened eyes, they witnessed their father and uncle killed by an explosion set off by a suicide bomber. Today, while still focusing on their studies, they help their mother with the myriad farm and household chores. Ladji, timid, speaking very little, constantly follows his older sister during everything that she does. Falta, a true leader, directs the boys with an iron fist. (Source: https://www.imagesfrancophones.org/catalogue/le-spectre-de-boko-haram)

Cyrielle Raingou bases her work on redefinition, the visual representation of African heroes and superheroes, the appropriation of story telling from the voices throughout the continent and the creation of positive images to inspire the  generation of African youth. After studying law, she turned to cinema, obtaining a Master’s degree at the University of Yaoundé I. She participated in several writing residencies and co-production forums in Germany, Senegal, France, Burkina Faso and in Portugal—studied documentary filmmaking. (Source: https://vod.oi-film.com/casting/cyrielle-raingou)