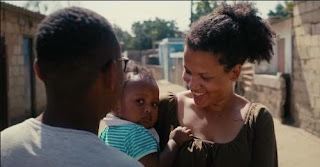 The Homes We Carry portraits a family torn apart by the turmoil of world history between Germany, Mozambique and South Africa. At the center is Sarah, a young Afro-German mother. She wants her daughter to have the relationships she herself lacked as a child. Therefore, she travels with her to Africa, where her own father and the child's father are waiting for them. But meeting Luana's father, who suddenly has to grow up when Sarah shows up at the door with his daughter, presents both of them with great challenges. Meanwhile, Sarah's father Eulidio recalls the almost forgotten and unjust history of the Mozambican contract workers in the former GDR. In his nostalgic daydreams, he returns to the origins of his European family and their sudden separation - a fate he shares with many other German-Mozambican families. (Text source: YouTube)

Excerpted from the article by Jürgen Bürgin: avisualzine.com

“During the research for the film, I met many broken and traumatized Afro-German family members who were affected by the end of the GDR. Like many others, Sarah also understands at some point that being Afro-German is not a contradiction, not wrong and unwanted, but an enrichment and a wonderful gift. Showing the story of Sarah’s family means making Afro-German identity visible and emotionally comprehensible across generations.”

With this important film, Brenda Akele Jorde succeeds in a wonderful way in pointing out an almost forgotten chapter of German-African history – and this with a personal, emotional and touching story. "As the daughter of an Afro-German couple, I’m interested in the stories and origins of other Afro-German families," says the director. “These are largely unknown or invisible in Germany. As a result, we are seen less as part of German society and are less able to feel part of it.”