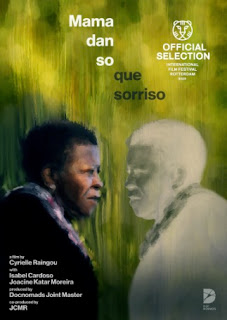 Synopsis
The relationship between Isabel Cardoso and her deceased mother illuminates the strength, struggles and transcendence of black womanhood.

Bio
Cyrielle Raingou bases her work on redefinition, the visual representation of African heroes and superheroes, the appropriation of storytelling from the voices throughout the continent and the creation of positive images to inspire the current generation of African youth. After studying law, she turned to cinema, obtaining a Master’s degree at the University of Yaoundé I. She participated in several writing residencies and co-production forums in Germany, Senegal, France, Burkina Faso and in Portugal where she studied documentary filmmaking. (Source: https://vod.oi-film.com/casting/cyrielle-raingou)