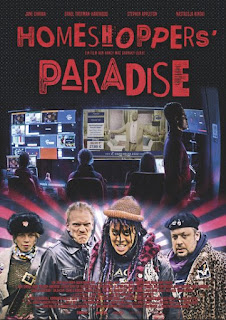 Nancy Mac Granaky-Quaye
Homeshoppers’ Paradise
Afrika Film Festival de Cologne
11.2.  19h30 / Film Forum Museum Ludwig
Germany - 2022 - Fiction - 89 min
https://www.afrikafilmfestivalkoeln.de/
Synopsis
Lisa, a rebellious Black punk, lives with her gang in a construction trailer on an occupied lot. The friends are united in the fight against the bourgeoisie, capitalism – and the power of the state. When Lisa learns of the impending eviction of the site, she must take the initiative to guard a long-kept secret. Behind the others’ backs, she accepts a job offer at the epicenter of capitalist consumer society: as a presenter alongside her hated father on the home shopping network HSP.
Bio
Nancy Mac Granaky-Quaye is a director, author and vision mixer for cinema/TV/online. She has shot multiple short films, a mid-length documentary film, advertisements for cinema, and magazine reports, and has worked as programme planner for the Afrika Film Festival Köln (AFFK) for two years. Her personal highlights as a vision mixer include working on the MTV Unplugged concert by Sportfreunde Stiller. Her graduation film at Cologne’s International Film School, Beento (2007), ran for six months in movie theaters (as part of the compilation Am Ende Kommt die Wende) and was shown at the Max Ophüls Festival in Saarbrücken and at the AFFK. It received the Best Student Film Award at the Short Cuts Cologne festival, where her short film Gehenlassen also won the Audience Award. Her documentary I Have a Dream about the Black Lives Matter protests in Cologne was among those featured on the Black History Month 2021 programme. Nancy’s debut feature Homeshoppers’ Paradise (SWR, ARTE) was recently completed and will be shown in 2023 on ARTE and by ARD.
Posted by Beti Ellerson at 17:26
Email ThisBlogThis!Share to TwitterShare to FacebookShare to Pinterest
Labels: Germany, Nancy Mac Granaky-Quaye