Behind the camera, in the frame: African Women's autobiographical imaginaries 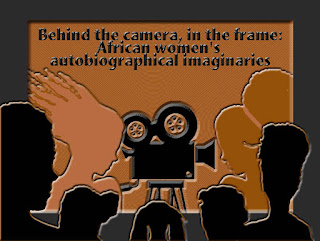 Behind the camera, in the frame: African Women's autobiographical imaginaries

The practice of self-inscription is evident in many of the works of African women filmmakers, where identity, belonging and self-discovery are prevailing themes. Hamid Naficy describes these autobiographical imaginaries as a dominant motif in “accented films” where self-reflexive strategies that inscribe the filmmaker are also employed. This article draws from some of the multiple and diverse themes of African women makers/protagonists in order to highlight some of these forms of self-documentation.

South African visual activist Zanele Muholi, affirms her subject positioning, reclaiming the right to tell her own story, taking proprietorship of her images and encouraging other black South African lesbians and Africans as a whole to do so. Zanele Muholi co-produced Difficult Love (2010) with Peter Goldsmid under the condition that she has certain rights and the ownership of her story in the documentary. Interwoven into a composite of her visual works with interviews of her, her friends and colleagues, the film relates her experiences and the complexities of her life: as lesbian, family person and as participant in her society.

In the documentary The Vibrancy of Silence: A Discussion with my Sisters (2018), Marthe Djilo Kamga inscribes herself in the conversations with four other Cameroonian women, like her, artists who know exile as well as how necessary it is to transmit to younger generations what they have learned as their multiple identities have evolved and fused.

Through the Eyes of My Daughter (2004), Zulfah Otto-Sallies focuses the lenses on her family, zooming into their world in the Bo-Kaap community of South Africa for an entire year. The cross-generational response to contemporary society is the thread running through the film, sometimes showing differing perspectives regarding the realities that the current generation confronts. The evolving story contrasts the apartheid-generation of Zulfah with teen-ager Muneera’s experiences in a democratic South Africa. In full view of the camera, one has a glimpse of the strong bond of the mother-daughter relationship. Zulfah Otto-Sallies invites the viewer into their world with all of the unpredictability that comes as a result.

Mame Woury Thioubou gazes openly into the mirror. Face to face with her image she compares it to the beauty and historic elegance of the women of St. Louis, Senegal, which had always been her idea of feminine beauty. Her film Face à Face, Femmes et beauté à Saint-Louis (Face to Face, Women and Beauty in St. Louis, 2009) provides a cross-generational perspective of notions of beauty past and present.

Employing the camera as a strategy of self-reflection, Aicha Thiam’s Papa (2006), is structured around memories of presence and absence. Her face fills the frame as she addresses her recently deceased father in voice-off narration. The poem-film is a journey between two worlds. It is a film-letter of her love, a space where she could communicate directly to her father and ultimately find relief from the loss of his physical presence.

The journey of identity, to cite Hamid Naficy, is omnipresent in Sarah Bouyain's Les Enfants du blanc (Children of the White Man, 2000), during which she returns to Burkina Faso to document her family history. While narrating in voice-off Sarah Bouyain recalls her childhood summer vacations in Burkina Faso, with her paternal grandmother, Jeanne Bouyain. She also remembers her great grandmother Diouldé Boly who refused to speak in French because it brought back painful memories. These remembrances form the basis of her family-history meetings with her grandmother, visualized in the documentary. Her recollections are framed in a sequence of questions to which her grandmother responds in detail, sometimes elaborated by elements of Sarah’s research, which the latter narrates in voice-off. The internal journeys with her grandmother also entail voyages through the family photo albums, chats together during daily chores.

Similarly, in La Souffrance est une école de sagesse | Suffering is a School of Wisdom (2010) Astrid Ariane Atodji set out to resolve the increasingly nagging questions of belonging, in a voyage from Cameroon to Benin, the land of her father, where she had never been. Questions of identity began to surface in her during an interview when she was referred to as "the Cameroonian of Beninese origin." Born of a Cameroonian mother, she never doubted her Cameroonian-ness. However, the question of identity, of belonging, started to manifest itself, an uneasiness gradually developing: “I wanted answers to these questions that I asked myself and to which my father did not satisfactorily give me answers.”

Claude Haffner focuses most of the story in Footprints of My Other (2012) on her second return voyage to the land of her birth, though it was not the story that she had initially set out to tell, but rather of a more politically-focused theme regarding the region of the Congo where her family lived, and how they were affected by it. Nonetheless, she realized that in order to tell the complexities of this story she would have to enter into it. Hence, her autobiographical consciousness unveiled during the filmmaking process. She explains:

“The film should redefine itself as the shooting unfolds in the same way that the filmmaker redefines herself in relation to her initial idea and to her subject. This is evident in the fact that in 2004 I could not foresee that I would be expecting a child after having filmed in the Congo, and that I would actually include myself, while pregnant, during the scenes in Alsace. Somehow, the film helped me to define my identity and my place between Europe and Africa and to become aware of the richness that I possess to have come from a double culture or perhaps I should say, multiple.”

Similarly, Taghreed Elsanhouri had no intentions of making an autobiographical story when she set out to Sudan to make a film about the Aljazeera-commissioned project on the children of the Mygoma Orphanage in Karthoum. However, after meeting baby Abdelsamih, the emotional journey of growing close to him while making the film becomes part of the story. From the filmmaking experience she evolves from exploratory filmmaker to the mother of little Abdelsamih.

On the other hand, in Mundele; blanche, etrangère (white, stranger) Matamba Kombila consciously positions herself as its subject, as if to invite the spectator to reflect on the complexities of her mixed-raced, mixed-cultural positionality and the fraught identity politics of who she is.

Beryl Magoko's In Search…, at the same time autobiographical as the title suggests, it is also a rediscovery, a search for self, as well an exploration to understand the experiences of others who underwent female genital cutting. And in the process, she found the courage to talk with her mother, about her own experience--a topic which is considered taboo, hence through intergenerational dialogue, a conversation opens towards the future.

The filmmaker/participant duality is evident in the desire to be at the same time auteur and protagonist of the history that she mines. Hence the subjective strategies of many of these stories emerge from a mode of autobiographical practice, which negotiate reflection, questioning and memory through acts of self-inscription, even if it entails for some, to confront a long-held resistance to divulge private, intimate moments of self or family histories.

Related articles from the African Women in Cinema Blog

Aljazeera - Witness - The Bag on my Back, a documentary film by Tapiwa Chipfupa (Zimbabwe)
https://africanwomenincinema.blogspot.com/2013/08/aljazeera-witness-bag-on-my-back.html

Words of Marthe Djilo Kamga: Vibrancy of Silence: A Discussion With My Sisters
https://africanwomenincinema.blogspot.com/2019/03/words-of-marthe-djilo-kamga-director-of.html

Email ThisBlogThis!Share to TwitterShare to FacebookShare to Pinterest
Labels: autobiography