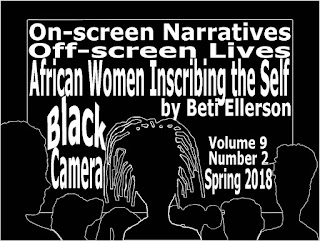 The journeys of on-screen characters, while most do not reflect the off-screen trajectories of the real-life women, some do provide glimpses that parallel the paths that these women have voyaged in their own lives, perhaps influenced by their characters, or more brutally, because of them. Their travels, imaginary and real, had some relationship to their roles as actor and/or the choices they later made as a result of their encounter with/within the world of cinema. It is their on-screen legacy, especially in the case of iconic films, that has been the most enduring; as these women, far removed from their fame in these early films, live quiet off-screen lives a long way from the experiences of their cinematic characters.

Moreover, the filmmakers, who navigate frontiers, negotiate relocations and displacements to extra-African environments, inscribe an autobiographical journeying, problematizing these itinerant identities in their films. Likewise, traveling, sojourning and relocating across the globe involve shifting or ultimately expanding the identity of their cinema. Hence, an exploration of on-screen representations offer a larger picture of their experiences in front of and behind the camera.


Subheadings:
Reel imaginaries, real herstories
Behind the camera, in the frame: autobiographical imaginaries

Teaching African Women in Cinema, Part One (Fall 2015)
Posted by Beti Ellerson at 18:37