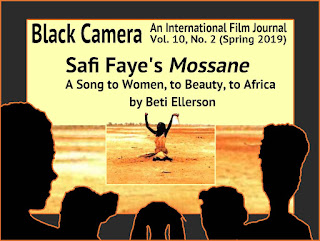 Mossane (dir. Safi Faye), completed in 1990 and released in 1996, is a timeless piece. That is the nature of legends, of myths, of allegories. Destiny has been inscribed, fate already determined. Having created a narrative imbued in Serer mythology, structured around the fate of a fourteen-year-old girl, who because of her stunning beauty, is returned to the Pangool spirits through the waters of the Mamangueth, Safi Faye’s cinematic endeavor was to decide in what way to tell the story and how to visualize it. This article frames the film Mossane within the context of Faye’s corpus of works, especially as it relates to prevailing themes that foreground women’s experiences within the rural sector and countryside, socio-economic matters, education, issues at the intersection of tradition and modernity, rituals and ceremonies and the importance of oral tradition as a foundation for visual storytelling. Set in Faye's Serer homeland, Mossane compares to her early Serer-focused films that draw its cast/participants from the village. While it is her only film in which the scenario and narrative are entirely fictionalized, the themes of class, the quotidian experiences of the rural-dwellers, oral tradition, struggles based on land and nature, the storyteller, are recurrent topics in Faye’s oeuvres. In addition, the article speaks to the manner in which Mossane addresses the right of women to have power over their own bodies and desires and the choice to marry who they choose, by framing the analysis of women's rights in the context of the broader discourse on the peasantry, education, custom and modernity.

Teaching African Women in Cinema, Part One (Fall 2015)
Posted by Beti Ellerson at 07:11