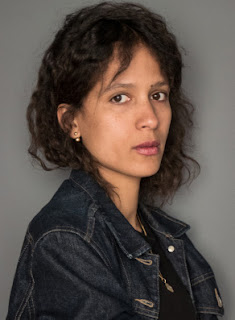 In collaboration with Africine.org, translated from French by Beti Ellerson and published on the African Women in Cinema Blog.

French-Senegalese filmmaker Mati Diop's Atlantique, in competition at the 72nd edition of the Cannes Film Festival. The fiction offers an original point of view of the Senegalese youth who embark on the fatal crossing to reach the European coasts.

Falila Gbadamassi: You recognised the extent of this illegal emigration by sea in 2008 during a stay in Senegal. For you, in fact, evoking this subject could be done only through the angle of "mythology" as you call it?

Mati Diop: Absolutely! It is a good start because I make a film when I feel that I have a personal and unique contribution to offer to the debate. If it is to make another film about illegal immigration, it's not worth it. Indeed, cinema, gives me extraordinary, magical and powerful tools to tell things differently. I try to benefit from the infinite power that cinema offers. It is really fortunate to have such an extraordinary medium; it's really a magical power!

When you thought about the fantastical element of your film, did the idea of ​​the jinn immediately come to you or did you first explore other ideas?

First, the fact that the lost-at-sea are unburied gave me the idea to bring them back. "Unburied" is associated with "wandering": this belief is universal. Then, the question of what form to give to these ghosts was posed: would they return in flesh and bones out of the ocean, in the form of holograms? There were a variety of ways to bring them back. But I wanted the form of these ghosts to coincide with the culture of Senegal, among others, Muslim. I was very seduced by the djinn imaginary (spirits, in the Muslim culture) and "faru rab" (husbands of the night) who are djinn lovers. Visually, I imagined the djinn lover to enter through the woman’s navel, to possess her and leave. These stories fascinate me. I discovered them gradually during my trips to Dakar. I was inspired by this fantasy especially as it corresponded to the idea that these ghosts are born, in a way, in the imagination of these women (that the contenders initially leave behind them). For me, ghosts are first born in us, it is through our memory that we make them return. It is the imagination that creates ghosts. After, their white eyes, the fever is a physical manifestation of their presence (especially in the film). In Muslim and African culture too, I believe, there are specific hours when spirits come out. I was told these stories when I was a child. As a filmmaker, knowing that at a precise moment, something invisible is supposed to happen, it drives me crazy!

Your film appears as an ode to this exuberant African youth. Was it really your intention to pay tribute to this Senegalese youth?

I especially wanted to pay homage to this youth vanished at sea. This is my primary intention because it was very important for me to dedicate a film to this lost generation, ghost, while giving it life through the living. It is also a way of making sense out of their actions. They have not reached Spain (destination targeted by young Senegalese who go to sea), their dream... But maybe they are for many of those in the riots of 2012 (Note by Africine: especially driven by young Senegalese who opposed a new term of the incumbent President Abdoulaye Wade). Having disappeared at sea, these young people may have allowed the rebirth of a new youth. Anyway, I like to think that these young people who rebelled in 2012 during the “Dakarois Spring” carry in them these missing ones, and that the missing also took something of them when leaving.

Besides, I did not want to make this youth a monolith. I wanted to take into account its diversity and complexity and to show through the characters of the film, the myriad Senegalese, Muslim, American, European influences. Influences related to new technologies, ancestral beliefs. Young people are at the crossroads of so many realities. This breeding ground is incredibly fertile.

This metaphysical dimension that you explore in the cinema, do you believe in it personally?

I believe in fiction!

The filming took place in the dust of Dakar, the Senegalese capital. The atmosphere of the city is too, rendered very well. How did you shoot in this jam-packed city?

The best we could (laughs)! The shooting of Mille soleils (Thousand Suns, 2013, a documentary made in Dakar) went very well. It was nevertheless very physically demanding. On the scale of a feature film, I was very concerned about the level of difficulty. The Senegalese, themselves, thought it was crazy to shoot in Thiaroye (suburb of Dakar). However, we did not have as many obstacles as one would have imagined. I must say that filming there gives me more energy than what one would have imagined otherwise.

As the first African woman filmmaker to be in the running for the Palme d'Or, you are a pioneer...

Yes, in spite of yourself. And you belong to a filmmaking family. There is your renowned uncle, Djibril Diop Mambéty whose film Touki Bouki is also at the heart of your documentary Thousand Suns. There is also your father, Wasis Diop, a musician who has authored famous soundtracks, including those of his brother. All this is part of a continuity that seems consistent.

Consistent, I don’t know. But it is a personal continuation that I chose to make. I am fortunate to have inherited an extremely strong and inspiring history, while at the same time feeling very free to write my own story. It is the most beautiful legacy: to continue while reinventing and remaining oneself. The best way to pay homage to the work of my uncle and my father is to continue the path in my own way, with the tools of my generation.

And to represent Senegal: the link to your African origins is quite strong. You have even said that it was the impetus of your desire to make films.

It does not mean that all my films will take place in Senegal. However, my relationship to cinema is intertwined with my Africanity.

Thank you very much, Beti!