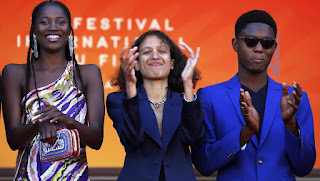 English:  Synopsis and trailer below

"The question of exile is a mirror between Africa and the West. And being mixed-race, it is the central channel for my concerns."

"I wanted to give voice to the actors of this migration phenomenon, which is represented by others in a destructive, despised, mutilated way."

"I am here at Cannes because of the struggles of many women who worked for parity between women and men."

"I have a mad love for my country, Senegal. It is a place that inspires me immensely--photographically and cinematographically."

Translation from French of an RFI interview by Elisabeth Lequeret at Cannes 2019
En français: RFI : https://www.youtube.com/watch?v=tt9A59vSdzM

"The film was born from the realisation that it was through fantasy that I wanted to tell a certain story of the disappeared at sea. And this particular fantasy is inherent in the reality which I observed and which I interpreted as such at that moment. And it was a period when I also began to consider the ocean differently, where the notion of the ocean as a tomb came to me. It's something that is part of the imagination of a certain black-Creole-Caribbean history. And there was a certain intuition. An intuition that emerged when in Dakar in 2009 and feeling the mysterious and disturbing links between the slave trade, colonisation and illegal immigration."

"This film is also a return to my African origins. And to write and invent the character of Ada, it is also a way of living the African adolescence that I did not experience."

"I love the love stories of cinema and when I started to write this love story, I realised that I did not have the reference of a black mythical couple such as "Romeo and Juliet", and I found that completely insane and it gave me even more of a desire to write this story and see it in the cinema."

Along the Atlantic coast, a soon-to-be-inaugurated futuristic tower looms over a suburb of Dakar. Ada, 17, is in love with Souleimane, a young construction worker. But she has been promised to another man. One night, Souleimane and his co-workers disappear at sea. Soon after, they come back to haunt their old neighbourhood by taking possession of the girlfriends they left behind. Some of the workers have come claiming revenge and threaten to burn the tower down if the developer does not pay their wages. But Souleiman has come back for Ada, so they can be together one last time.