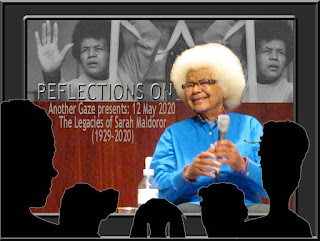 On 12 May 2020, the feminist film journal Another Gaze hosted the virtual event, The Legacies of Sarah Maldoror, followed by hundreds of spectators.

Annouchka de Andrade and Henda Ducados  introduced the life and work of their mother, Sarah Maldoror (1929-2020), as well as participated in ongoing dialogue with the "roundtable" participants and responded to questions from the audience. The interventions of Annouchka and Henda added a rare personal dimension of Sarah Maldoror as mother, as companion to Mario de Andrade, their father, and the behind-the-scenes life of a woman engagée, which the complexities of her life have made of her an enigmatic figure. This was definitely the highlight of the event. *See excerpts of their comments at the end of this report.

The daughters’ introductions were followed by dynamic and powerful readings of extracts in French by Marie-Julie Chalu and the English version by Gazelle Mba of Cahiers d’un retour au pays natal (Return to my Native Land) by Aimé Césaire, a life-long friend and comrade.

Nonetheless, the event could have benefited from the voices of those who know her and her work intimately having interacted with her artistically during her lifetime and who have followed her contemporaneously, which includes knowing directly her present work and how it has been influenced by her early periods. Moreover, she was a longtime resident of Seine Saint-Denis located in the "Grand Paris", a multicultural department which includes a diverse immigrant population. The documentation of its life and people has also been an important part of her work, for instance.

Additional comments added 18 May: A little more than a month after Sarah Maldoror's passing on 13 April, Le Monde published an article on 17 May highlighting the very high mortality level due to the Covid 19 epidemic in the department of Seine-Saint-Denis. This is a sad reminder that this epidemic took Sarah's life and that she too lived in this sprawling community where her neighbors are the key workers serving the needs of the Grand Paris, as health workers, caregivers, cashiers, vendors, delivery people, and hence, travel the furthest and most often and are more susceptible to exposure. So it is worth noting that while she is best known internationally for her work related to African liberation struggles, she quietly championed for a better life for the Séquano-Dionysiens--in the everyday, and as noted above, in her cinematic expression.

While the English-language interventions of the event were heavily anglo-phone centred, Annouchka and Henda hope that it will draw more international attention to the works of their mother. Moreover, they have opened Sarah's archives for research and study with the aim of making her work visible to an international public.

There was much talk about "building a legacy", I mentioned during the event, that within the “francophone” cinematic landscape Sarah Maldoror’s work has some visibility and recognition, and on numerous occasions she has received due tribute highlighting her life and legacy, naming a few in the past 2 decades:

2011 - Knight of the National Order of Merit. (Website of French Government in French of speech by Frédérique Mitterand, minister of Culture et Communication) See translation here.

1998 - Sarah Maldoror ou la nostalgie de l'utopie, A film by Anne-Laure Folly (See: http://www.film-documentaire.fr/4DACTION/w_fiche_film/5850_ (See synopsis here). Annouchka stated that she tried to contact Anne-Laure Folly in 2019, and has been looking for the film as Sarah no longer had a copy. So it is not for sure that the film, is in fact accessible.

As one of the cinematic orphans of Sarah Maldoror, it has been an awakening, as she has led the way for me. When I told Sarah the title of my book "Sisters of the Screen" (2000), she cautioned me that we are not sisters really, but are each in our isolation making films. What she meant in fact was this implied solidarity among women in African cinema that I was projecting did not exist. I was determined that my work would be the beginning of this "sisterhood". Twenty years on, we'll see where we are.

So to Annouchka and Henda, I send my sincerest and heartfelt wishes, and hope that the gestures of support and the tributes in her honour will show that your mother’s work will live, and continue.

Henda:
To share some of the great teachings and lessons that Sarah transmitted to us. I must say, during my teens Sarah's eccentricity bothered me, she wore a big afro, jeans, boots, until the mid-seventies: radical the revolution, seemed very odd to me. I asked her many times, why she could not be normal, and work at the local bakery and wait for us after school and a glass of milk and cakes...

…She always consider my sister and I as individuals. It was tough to deal with that as a child, but as an adult I appreciate that even more. Here we are, I am asked to talk about our mother… Our childhood was never easy but it was fun and unpredictable…People coming in and out of the house all of the time, good hearted strangers babysitting us while Sarah traveled the world. Later on during my history class at the university, I was astonished by the fact that most of the historical figures of the sixties stayed with us in our kitchen and ate with us. There were very few rules that I could remember, but one was to leave regrets/adversity at the door. So thank you Sarah for being so courageous, and passing this on to us, as you gave us the strength to face my fears and venture out and have an impact in this world…

…It is also important to talk about Sarah as a woman, and talk about this great love story that she had with our father which led to the two projects Sambizanga and Mongambee…her view about feminism, about being a single mother, female head of household, taking care of two daughters and making sure that the collectivity was very important. Not looking at the individual but at the collective…

Annouchka:
...We were born in cinema, so we had to go to cinema to see her movies, so we grew up at the cinematheque at Algiers…at that time and it was absolutely lovely because sometimes when she had an appointment she left us in the movie theatre for hours and we were watching movies while she was working and then and she came to take us back, so watching movies was part of our life, it was easy for us.…

...In spite of adversity, poetry was always resonated in her movies. The vibration of poetry was inside her body, poetry was clearly in her DNA and therefore in all of her movies. To give a few examples, Sarah cared about the clouds, she cared about the movement of trees, and for us it was sometimes difficult to keep up with her. Attending political or professional meetings, going to film festivals, she brought us along everywhere, any chance that she had. For instance she would take us spending hours with Aragon reading Victor Hugo. Everything was an occasion to bring art into our daily life…

…She was curious and aware of everything around her and when she decided to make a movie she started with a painting. It was important for her, each movie has a painter or a painting in particular relating to the movie and she would take her crew to a museum to see this painting or the art of this painter before starting the shooting. This connection was very important as we said she did not separate her life, she did not separate art into segments. So for her cinema was all-encompassing, so the music, the art, the painting, the sculpture, was all part of it and she wanted to mix everything, and that was very important, and what she liked was each time she was discovering a new country the first thing she wanted to do was go to a museum to discover the artists of that nation. To feel the art and to nourish her and her movies…

…I would like to focus on the poetical state of mind of Sarah. Sarah Maldoror is well known as a filmmaker and as a militant but this is a reductive point of view of who she actually was. Filmmaker, woman and mother, Sarah was first of all a poetic person, she did not separate her life in segments. Everything that she did was linked to this dimension. Original, generous, surprising. One of the last conversations that we had when she was at hospital, was the attention she had with the nurses. And whether my sister and I needed anything. The choice of her artistic name, Maldoror, along with her political conviction, attitude, sense of humor, guided her through the years. Her career: Sarah chose cinema to spread Africa to Africans and to the others. She always said, "we are responsible, no one else is to blame. We are the only ones who should tell our history, And in the words of Mao che tung: 'To be self supporting" and I would add, never complain and keep going on your road." Indeed Sarah was moving forward...

…At the end of her life what was the most important was education. She saw that education was the key to understanding each other and she focused on the fact that little children to go to cinema even before reading to be educated and open-minded to the world. Scala Milan which she made in 2005, was quite different than the others, perhaps for some less, militant. And the misunderstanding in Scala Milan, as in Monagambee of the term "complet", between the Portuguese and the militant, it's a story of young people who enter into a competition because they want to go to Italy to see the soccer team. But for Sarah, they go to Italy and they discover the Scala, the opera. Because for the young people in the "suburbs" of Paris, the opera, was something untouchable--unreachable for them, it was not part of their world. They wanted to break all of the rules and say that yes, opera should be accessible for anyone, even for young people in the "suburbs" around the world…

…My sister and I, as was said, are continuing to work on the existing archives, getting back rights and copies and restoring a few others. Our objective is to make Sarah's work known and share the archives. And what should be said is that despite thousands of negative responses, she never gave up nor did it change her attitude. I told her one time when we were talking together, that she never understood the word "compromise"…I would like to insist upon is the complexity of her thoughts and actions, the desire she had to probe and be proud of black culture, she always remained true to herself, she was open minded, aware of others, absolutely curious of everything, but for sure sensitive to the others, and her surrounds and always, always, ready for the unpredictable...
Also read on the African Women in Cinema Blog :