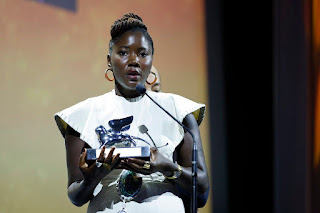 This is a history of transmission, of sorority, of passing on the torch, with this very women-centered film, and I am very touched by it…When I was filming Saint-Omer, there is a book that I keep at my beside by the poet Audre Lorde that I read every evening that gives me strength, called Sister Outsider, she says in speaking about Black women, ‘our silence will not protect us’, and I would like to say tonight, that we will no longer be silent.

Rama, a novelist in her thirties, attends the trial of Laurence Coly at the court of Saint-Omer. The defendant is accused of killing her 15 month-old daughter, abandoning her on a beach in northern France at the rising tide. From this story Rama would like to write a contemporary adaptation of the ancient myth of Medea. But during the course of the trial, nothing goes as planned. About to become a mother herself, ultimately, this closed session proceeding brings into relief her own relationship to motherhood.