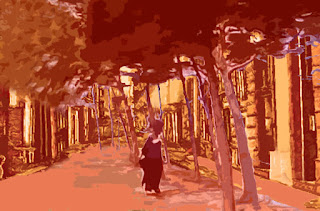 Safi Faye's La Passante 50 years on
Notes by Beti Ellerson
The 10-minute film La Passante, completed at the end of the first year of film school, Safi Faye made for herself, for her own pleasure, but also to put herself to the test. The African Women in Cinema Blog gives tribute to this “little intimiste film” which she “dared” to make 50 years ago in 1972.
She had this to say to me about how she came to make La Passante:

"I went to L’École Louis Lumière, one of the best film schools in France, in Paris. I learned like everyone else—I was the only African woman—how to handle a camera, and I became familiar with how to use the cinematography equipment. At the end of the first year I dared to make a little film…in 1972. Right away, everybody began to talk: “There is an African woman who is making films.” It is by chance and by choice that I made this little film, a little film, rather intimiste, that I made for myself. Afterwards, out of curiosity, people began to ask about the film.” (Sisters of the Screen, Beti Ellerson)

Safi Faye describes her film La Passante as influenced by Baudelaire's poem "A une Passante,” about the fugitive beauty of a woman passerby. In an interview with Cissé and Fall she had this to say:

“[It is] the story of a beautiful African woman who arrives in Paris. Dreamlike, she notices that everyone watches her, admires her. Among her admirers she chooses a White man and allows him to dream, then a Black man who dreams as well. They watch her walk down the street. In fact, they are dreaming. That is not at all my reality; Baudelaire inspired me.”

In La Passante, Safi Faye interprets the protagonist with Paris as the setting. In some ways, the film reflected her identity as a woman "divided between two cultures—French and Senegalese," yet defining herself as neither, "a Westernized or liberated woman"--in the sense of the 1960s women's liberation movements (Remy 1996). She elaborates her positionality and the duality of her identity to Françoise Pfaff in this way:

"The female protagonist of La Passante is a foreigner who arouses a certain curiosity among the people of the country in which she is presently residing. She lives in a country where she is neither integrated nor assimilated. She is in Europe but her thoughts are in Africa. I am just like her, I define myself as a 'passerby'."

Safi Faye’s identity as a passerby in Europe with thoughts of Africa is reminiscent of her role as “Safi”, when she partook in Petit à Petit (Jean Rouch, 1971) a cinéma verité film during which the characters had the liberty of interpretation in their roles. When asked by her African hosts, Lam et Illo, during their encounter in Paris, about her African origins, in a dreamlike sequence, a humming voice accompanies a shot of rolling waves as if traversing the restless sea in a journey to the continent. In the next scene the character “Safi” appears, continuing to hum the song, as she promenades along a path next to a white wall bordering the sea. A third shot returns to “Safi” relating the beauty of her country to her hosts: “the women are beautiful, beautiful as the night.” From this description she recalls the poetry of Baudelaire that lauds the splendor of women. In the same way, Safi Faye’s film, La passante captures a fantasy moment as a beautiful African woman strolls down a Parisian street.
Safi Faye's poetic sensibility, viewed early in her filmmaking with La Passante, evolved into an important element of her cinematic écriture. And her desire to mythologize beauty in her early cinematic work, sets forth in full splendor in Mossane, her latest work to date.
Image by Beti Ellerson