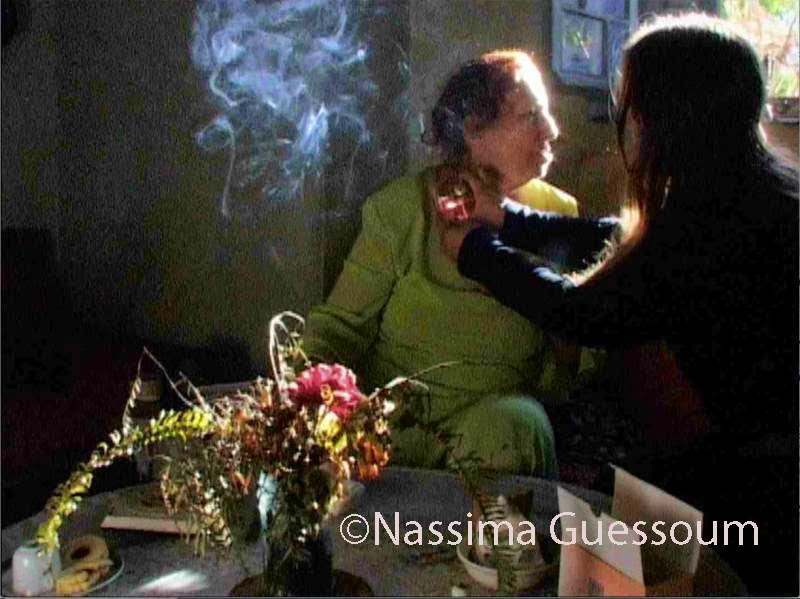 Nassima Guessoum talks to us about her film 10949 femmes "10949 Women" (2014), her passion for history, her research, the film shoot and the experiences of those courageous women.

Nassima, what motivated you to make the film?
I was motivated to make the film for several reasons. First of all, I am bi-national, I am Franco-Algerian. Although born in Paris, like many children of immigrants, since my childhood every year I spent my summers in a village in Kabylia. Later in 1999, I lived in Algiers almost a year to learn more about Algeria, from within. Moreover, I did my studies on the history of the Arab world, specialising in the history of the Algerian War of Independence. Despite all the books available at the time and all the documentaries produced, I only saw one approach, at the same time very factual, complete with events and policy analysis, dates, figures, but not from a human point of view. In France one spoke of "a war without a name"; for me, it was mostly faceless, disembodied, especially in terms of the representation of Algerians. They were all anonymous, commingled under the FLN acronym or labeled rebels. As for women, they were invisible.
In 2004, Gillo Pontecorvo's film The Battle of Algiers was released on the screens in France. This film captures a key moment in the Algerian War of Independence in 1957. He received the Golden Lion at Venice in 1966, though it remained censured in France until 2004, for almost 40 years!!!!
In this film, backed by the Algerian state and produced by Yacef Saadi, a leader of the FLN who plays himself, women are seen for the first time. These women were part of the groupes de choc as well as those who planted bombs, carrying out terrorist actions. They are represented as using their charms, their physical appearance and wearing European clothing to deceive the soldiers of the French army.
From there I did some research. The majority of women who were engaged in the struggle for Algerian independence led political actions or were liaison officers or nurses in the maquis. The “fidayines”, those who led armed actions of terrorism, were very rare: the most famous, Djamila Bouhired was among the seven women sentenced to death. She was defended by the lawyer Jacques Vergès, who became her husband. None of the seven women were executed; their sentence was commuted to life imprisonment. So I wanted to go beyond the image of the armed women, a clichéd image used by both sides: on the Algerian side to show a heroic battle, on the French side to show the FLN as "barbaric." Between the two, I looked for real people, individuals, their political journey, and what created them.

Nassima Hablal is a true pioneer. Head of household at 16, she began working in 1944. She was one of the earliest women in the political movement who advocated for the independence of Algeria. It is also because of her early political engagement in 1945 that I was interested in her. She was 16 when she joined the first political cells of the PPA, the party of the Algerian people, which operated clandestinely. Moreover, and also unusual during this time, and for a woman, who was also a "native", she was secretary to the governor's office!!!

Then when the revolution erupted in 1954, she was one of the first women to be contacted by the political leaders of the FLN to work in the secretariat, but also to hide the activists, etc ... She became the secretary of the CEC, the Committee for coordination and implementation, which consisted of five very important leaders.

This woman was an activist from the age of 16 years, until the independence of Algeria in 1962. She dedicated 17 years of her life, non-stop. This perseverance, this conviction, this strength of character impressed me. During the war, she is also the first woman who joined the UGTA (General Union of Algerian Workers), Algeria's first free trade union. She was the only woman in this organization, and with the officials she organised the famous 8-day strike in 1957.

I met Nassima Hablal for the first time in 2007. I came back to see her in 2008 and I started to film in 2009 for four years until 2013. As I explained to you before, I wanted in this film that the history not be disembodied, that it be conveyed through the character’s story. Through the cinematic apparatus, I was able to induce and construct this closeness with Nassima Hablal. Hence, it was important that this relationship actually exist, that it be the unifying thread of the film. I did not film all the time, but when I did come, though concentrated in time, I would say that I had pretty much daily contact.

Sometimes, as she was an elderly lady—she was 80 years old when I filmed her for the first time—she was not always at her best, other times she was sick or in hospital. She is a free woman, funny, engaging, highly intelligent with an impartial viewpoint and political analysis of a situation. She never showed bitterness or regret, even though post-independence disappointment was very great.

It was this freedom of spirit, of tone, of movement, this impossibility to "assign" her that also influenced the way in which the film was made. This is a story of an encounter, made of small means, of beautiful moments, which develops into a relationship. Nassima was well aware of the thrust of her words, what they conveyed.

Your experiences with the women…

Nassima Hablal is a person that really affected me. Her voice, her tone, her timbre, her songs, resonate inside me. She introduced me to two wonderful people, two committed women, generous and deeply sincere: Baya Taoumiya Laribi and Nelly Forget. In the film, Nassima takes me to Baya’s house. Nicknamed Baya el Kahla, which means the black one, because of her skin colour. She was twenty years old when she joined the maquis of the NLA (National Liberation Army), where she served as a nurse. She is also very funny. She traversed Algeria for nearly 700 km on foot to reach the Tunisian border, where she was captured and endured atrocities, including rape by French soldiers. She tells how her father, in whom she confided, supported her during this painful time. In the film, she tells me a very powerful phrase: "When one has been loved by her father, she is not afraid of life. That’s it, my daughter."

This is obviously not the whole story of Baya, who later became a midwife, but it is a very important moment, which also recounts what women underwent in time of war. The three women were tortured, only Baya revealed that she also endured gang rape. She and Nassima met in Tunisia upon their release from prison in 1961. The provisional government of the Algerian republic was based in Tunis before independence.

Nelly and Nassima knew each other before the war, through health and social activities. Nelly came from France; she must have been around 23 years old when she offers to work as a volunteer in the construction sites in the slums around the capital Algiers. Nassima is also a volunteer. They meet in 1951.

They reconnect in 1957 in the Sesini villa, a torture centre. Nelly is not part the FLN, but is accused of supporting and hiding members of the FLN. Hence, she is arrested and tortured. At trial she is released. Nassima, on the other hand, "is a big fish," she will be tortured in seven different centres, including forty days in the terrible Sesini villa. She is sentenced to five years in prison.

One does not come out the same after such encounters, and such stories.

The response of the Algerian public...

The film was screened as part of the Festival des Journées Cinématographiques in Algiers, it received the award for best documentary. The audience was very moved; there were young people, people of all ages. And I believe that the scenario, the incarnation of history, of this modest and brilliant character was something precious. Many people were crying. Really! The reception was wonderful; also the critics in the press. Unfortunately, this was the only screening there, while the film was shown twice in Morocco, in Egypt twice, it was presented in Sudan, in Benin, and it will be in Turkey, and in several festivals in France.

10949 women. This is the official figure of the number of women who participated in the Algerian war of independence (the number of women, identified in 1973 by the Department of Veterans Affairs in Algeria). They were certainly more numerous in practice, especially in the peasantry.

The film is in competition at the 24th edition of FESPACO 2015 as part of the official selection...

For me it is a great honour that the film is in competition, representing Algeria. Symbolically this is very important, the film puts things in perspective and evokes certain thorny political issues in Algeria.

Whenever the film wanders about, I am thinking to myself that Nassima Hablal and her friends also journey, telling their story, our story, around the world.