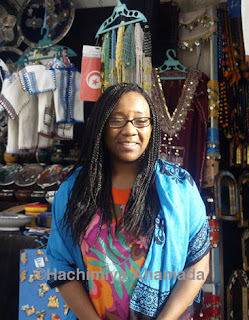 Hachimiya Ahamada, diasporian of the Comoros and French of Comorian origin, embraces both her cultures, while at the same time in search of an identity she knows only from her parents stories and images that she has seen. It is through cinema—the lens of her camera, that she finds her Comorian roots.

Hachimiya, you were born and raised in France, part of the Comorian Diaspora who has deep roots in the Comoros.  What is your relationship to the Comoros as a Diasporan in France?

I went to the Comoros for the first time when I was already an adult, a bit late to search for one’s family and origins. During my childhood in Dunkerque, the Comoros remained an imaginary country and I envisioned it through the eyes of my parents. I also discovered the archipelago through the images of an idyllic island: postage stamps, videos, photos, tourist posters, naive paintings...

My father worked as a packer in a metallurgy factory. His dream was to build a house for the family in his native village (Ouellah Itsandra in the Grande Comore). All of his savings went towards the realisation of this dream. Unless the house was completed we would not go to the Comoros. That is why it has taken so long to go there, even though the house is still not quite finished.

I define myself as a child of the Comorian Diaspora who has the wealth of two cultures (that of birth and of origin). Through cinema, I try to understand my Comorian roots. I want to film the Comoros from a different perspective than the folklore, large weddings, traditions, and the legendary Bob Denard. I want to show a different Comoros than preconceived ideas of it.

What were your experiences with cinema while growing up and how did you come to filmmaking?

During my adolescent years, I spent most of my Wednesday and Saturday afternoons in a video workshop entitled "School of the Street" in a youth and culture centre in Dunkerque. It is there where I took my first steps in filmmaking. Together, my friends and I came together as we made our first attempts at filming and also to watch films. We learned to see critically by watching challenging films. There was such a chemistry between us that today many of us are connected in some way to cinema (projectionist, producer, director, coordinator in the distribution to schools and so on). The “School of the Street” was our golden age: we lived our adolescence through moving images!

At the time, there was also "Les Rencontres Internationales Cinématographiques de Dunkerque / The International Film Festival of Dunkerque" (now defunct). Mingling among these established directors at the festival stimulated our desire to make films. I did not dare try. I did not feel capable even though I dreamed of doing it. With the motivation of my friends I found the courage to take the film school entrance exam. I studied film directing at Insas (Institut National Supérieur des Arts du Spectacle et de la Diffusion) in Brussels, graduating in 2004. Four years later, I made my first short fiction film The Ylang Ylang Residence about the Grande Comore Island. To my surprise, the film was screened at the International Critics Week at Cannes in 2008.

The themes of most of your films focus on the Comoros—Feu leur reve, The Ylang Ylang Residence and your last work Ivresse d’une oasis— indicative of your desire to tell Comorian history through film.

The “history” of the Comoros, is a big word! In fact, more humbly, these three films relate the story of the house in the homeland: the ideal home that takes time to build or to be completed. Our parents thought at first it would be the 'home to settle in' and then over time it became the 'vacation home' and as time passed it became the 'grave house' because the descendants return less and some do not come at all. To build one’s home is to leave one’s mark in the native village in which one has been long absent. As a trilogy these three films allowed me to explore the fate of these uninhabited houses waiting for their owners who have remained in France or elsewhere.

Feu leur rêve, my graduation film, written in a poetic way, recounts a fantasy Comoros while still in Dunkerque. The Ylang Ylang Residence, my first short fiction film, relates how the islanders living in houses made of straw or sheet metal, are not able to benefit from the permanent structures of the absent migrants. L’Ivresse d’une Oasis closes the chapter of my exploration of the subject of the house, and going further by travelling on all four islands of the Comoros archipelago in search of its Comorian identity.

Ivresse d’une Oasis explores the relationship between the inhabitants of the Comoros and the Comorian Diaspora that return to the homeland—those who come from somewhere else and those who stay put. At the same time it highlights the dreams of the inhabitants and their ambivalence regarding the expatriates. This is in fact your story. While discussing the film, explore as well how you see a resolution to this phenomenon.

Ivresse d’une Oasis relates the unfulfilled need of the islanders to achieve their dreams. They leave in order to have it better when they return, always with the idea of building the concrete house. But the difficulty in achieving this dream is that the perfect home is merely a mirage. I translate the film in English as Ashes of Dreams. Dreams that in the end send the islanders in transit, somewhere, either to France or to Mayotte and Reunion. And these constructed foundations continue to wait...

Ashes of dreams is a film written in first person singular and then first person plural. I wanted to go back to the Grande Comore, to the family, without the label of 'I’ve come from…' to measure the temperature of the family bond. But time creates a fracture even with those with which there are blood ties. I remember a comment by someone who said 'I come back in order not to stay'. It's a rather difficult acknowledgement to make. Then also in this film, I wanted to break the image of the idyllic island of the Comoros by meeting the residents of the other islands in order to get the secrets of the real Comoros. I found a lead: Comorian migration is constantly in motion, it has always been throughout its history. By economic migration, many of the islanders dream of leaving their villages in order to have it better when they return. From the island of Anjouan, some go some 70 km in order to reach Mayotte. Since 1995, when the visa policy was established by Balladur—which is difficult to obtain by the residents of the other Comorian islands—the islanders crossed the sea by a kwassa-kwassa, a fishing boat. The death toll continues to increase as a result of this crossing. Thousands of people have died in silence. The sea has become their tomb in the place of a house.

Then, the islanders who have succeeded in crossing are given the label  'illegals' on the land that is naturally Comorian, by those who have chosen to remain under the French fold. An invisible border has been created between these sister islands, each of which looks for its Oasis, but at what cost? Each day the Comoros Archipelago sees deeper cracks in its Comorian identity. It is very complex to describe this Comoros of today; maybe the archipelago has to go through this in order to arrive at a better future.

I am delighted to see a real emergence of a Comorian cinema culture. In 1997 I interviewed Ouméma Mamadali, also from the Comorian Diaspora, who had recently completed the film Baco with Kabire Fidaali. She stated that the film was actually the first. You have been involved with the International Film Festival in Comoros created in 2011. Was this initiative a desire to put Comoros on the cinematic landscape? What are its goals and objectives?

I'd be interested to see your interview with Ouméma Mamadali. She is the first woman to have assumed the role of director and to have made a feature film in video format. I have never had the opportunity to meet the directors of Baco. I met two Anjouan actors who participated in the film and told me about their experience during the shooting. During my location scouting for a documentary in 2006, I was offered a copy of the film. I did not know about it at all.

My first fiction film The Ylang Ylang Residence is the first film in 35 mm format. It is one more step for the emerging Comorian cinema. Other Comorians of my generation are setting out as well.

Mohamed Said Ouma, a friend and great film buff, and also the director of FIFAI (International Festival of Films from Africa and the Islands of the World) in Reunion, initiated this project. He works with a team of Comorians, also passionate about cinema. They have skills and knowledge to share in terms of filmmaking. Among the group members I only know the artistic director Mounir Allawi, who trained at the School of Fine Arts of Reunion. He is a filmmaker and a specialist of Asian cinema, and the general secretary Yakina Mohamed Djelane, who has a doctorate in Anthropology. Being in the field, they bring a new momentum by giving an inside view of cinema to the audience. They are setting the foundation for a platform to develop and set standards for future filmmakers. They have made initiatives in some of the villages by showing diverse films. The festival itself will take place officially in December 2012. As a film industry does not exist in the Comoros, before one can create, one must be able to integrate the film grammar, to be able to analyze what's behind a shot, to dissect the language of a film. They have begun bravely to take on this task.

A future project on the Diaspora in France?

There is an idea for a feature film, which for now I'd rather not talk too much about because it is not completed, but it will be with the Diaspora in France! I am completing a screenplay for a short film. I am continuing my cinematic exploration of the Comorian Diaspora, which is visible in small numbers around the world. I would like to go back to the 1970s, where a Comorian migration was still very present in Madagascar, in Majunga. My mother was born in this city where there was a very strong Comorian community. I am inspired by that period and would like to tell how the Diaspora was perceived by the Malagasy people there.

Also see from the African Women in Cinema Blog: