Françoise Ellong: “My passion for cinema follows me everywhere, all the time” 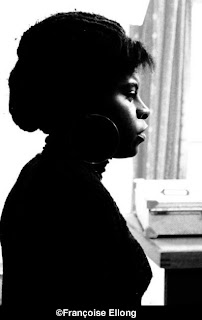 Françoise Ellong is already off to a good start on her career path. Trained in communication and filmmaking, her imagination leads to whatever may enrich her. She talks about her passion for cinema and her current and future projects.

What an incredible journey for a young 23 year-old-woman! What was your experience with the image as a child in Cameroon? Where did this amazing passion come from?

My love for film was not born in Cameroon, but my love for writing was, in fact. I discovered the world of images and screenwriting at 17, six years after my arrival in France and I must admit that today I cannot justify in a "reasonable" manner, my passion for cinema. It is there and follows me everywhere, all the time.

You studied communication in Paris and filmmaking in London, your training also includes several workshops and participation in film shootings. One sees an emerging cineaste who has a great desire to broaden her knowledge from diverse experiences and in various environments. Some thoughts?

I began my studies in communication because I believe it is absolutely essential in everyday life. On the other hand, I also built a safety net, to have something to fall back on “just in case". And it's hard to convince an African family especially, that one wants to make films, and nothing more. What one may also understand at some level is that the field of communication is not an illusion, far from it. It offers me a lot in my relationship with the various players in this arena. Communication is essential. As for London, my first wish was to go for a Masters in Film in the United States. My uncle convinced me to choose London. I followed his advice and I do not regret it at all.

I do make the most of what I learn, in fact, but my policy is that "each has her/his place" in cinema. Having gained knowledge about something does not mean that tomorrow I feel competent enough to make a film or that I can be the cameraperson. No. What it gives me is more clarity during the exchange I have with my technical crew, nothing more. I love learning and I think in that environment, one never stops doing so.

For me, I have absolutely no illusion that I am making African films. Not that I'm not interested, but that it is not at all the context of my films. However, I am preparing several projects that I want to shoot in Cameroon in particular, with Cameroonians. The nationality of the filmmaker has never been the identity of a film. So I do not wish to get into these name games, that when one does, it is difficult to get out of. I am very interested in African cinema, I watch and study it closely and hopefully in a very short time, I'll be able to carry out the projects that I just talked about. As for inspirations related to my previous projects, they are indeed very different and do not necessarily connect to one another. It is my way of showing that I do not want to be pigeonholed. My imagination is not restricted to clichés about my origins, or when I had the blues last month. I write my stories on the basis of the titles that come to mind. I develop an idea around a title, which may come a bit out of nowhere, and try to find a true meaning in it.

One perceives a current trend among African filmmakers who desire to work in a variety of locations outside their home country. You have worked a great deal in London and also in Paris where you grew up, and you have projects for Cameroon. What role will this diversity play in the identity of your films?

My cinema is like me: flexible. I have shot a lot between Paris and London, I would very much like to film in Cameroon and throughout Africa. I would like to film in whatever country I have the opportunity to develop an idea. I see in these places an infinite variety of subjects, cultures, meeting places, and so on...

You have a visible presence on the Internet, on social networks—the trailers of your films on video sharing sites—all, important ways to promote your work. What role do you want these media to play in the future?

I have always viewed these media as intermediaries, allowing me to get a feel for the public. They are a means by which I can attract people’s interest to come out to my screenings. I am all for the buzz effect, provided that they are smart. I separate "buzz" and "hype" because for me they are two completely separate things.

Interview with Françoise Ellong and translation from French by Beti Ellerson, December 2011