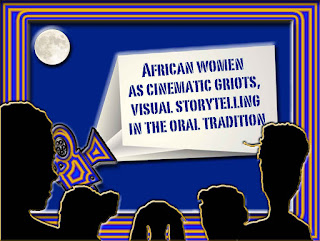 Women visual media makers of Africa and the Diaspora often invoke women's endearing role as storyteller--evident in the numerous interviews, conversations and discussion forums that I have had, participated in or read over the years. The practice of storytelling, of relating actuality, the real, of recounting history, the personal, the social, the political, are all features of the screen culture in which African women have evolved in myriad ways as stakeholders in the cultural production of their society and world. (Black Camera). These stories are visually told in myriad ways: through narrative fiction, documentary, filmed oral dramatizations, animation and theatrical plays. At the same time, women makers reiterate the origins of their cinematic storytelling: oral tradition, the legacy of the griot.

In his story "the tale of African cinema", the writer-historian Amadou Hampaté Ba recounts in inimitable griot fashion, the extraordinary experience of his mother Kadidia Pâté and her first encounters with cinema--in 1908 and more directly in 1934. In his recounting of his mother's story, she is also framed as the storyteller. This fascinating story offers the reader and listener a unique introduction to a early history of African women and the cinematic gaze.

Hence, cinematic visualizations of oral tradition follow the centuries long practices of African orature, highlighting its critical role as foundation for visual storytelling. Ghanaian Efua Sutherland's 1967 television production Araba: The Village Story, documents the groundbreaking Atwia Experimental Community Theatre Project. In Fad'jal (1979) Safi Faye recalls Amadou Hampaté Ba's well-known phrase: "When an elder dies it is as if a library has burned down," portraying the richness of African oral tradition and the importance of future generations that people learn and pass on their history. Similarly, her film Mossane (1996) is a timeless piece, which is the nature of legends, of myths, of allegories. Destiny has been inscribed, fate already determined. Having created a narrative imbued in Serer mythology, Safi Faye’s cinematic endeavor was to decide in what way to tell the story and how to visualize it.

South African film school director Maspeke Sekhukhuni, empowers her women students by reminding them that women are the best storytellers in Africa. From there she encourages them to tell those stories--from whatever source they come from. According to Joyce Makwenda women were the cultural custodians culture in Pasichigare/Endulo, the precolonial era of Zimbabwe. Through storytelling, they educated, informed and entertained the children, family and community. Women are continuing the storytelling tradition through cinema, using it as well as a tool for change.

British-Nigerian Ngozi Onwurah's whole approach to storytelling is derived from her childhood in Nigeria, where she was told a lot of stories. Stories that she contends, do not distinguish realism and non-realism. Similarly, even before Wanuri Kahiu learned about myths and legends, she recalls the stories that her mother told her as a child. Later as she grew older she discovered her own stories, exploring the cultural expression and creative works of Africans throughout the continent, such as the fascinating work of Nigerian writer Ben Okri and the idea of the spirit child. She also recalls the Sangoma of South Africa and how they deal within the spiritual realm as well as Dogon mythology. In Pumzi, Wanuri Kahiu returns to Kenyan legends and mythology as her protagonist Asha looks to Mount Kenya for survival and a hope for the future.

Germany-based Iman Kamel from Egypt, considers herself more like a storyteller than documentary filmmaker, using the capacities of cinema to tell untold stories. Ebele Okoye grew up in southeastern Nigeria where, like many African filmmakers, oral storytelling was the collective experience of the society. She yearned to share these stories, recounted around the fire, under the moonlight, and it was through the medium of animation filmmaking that she fulfilled that dream. Similarly, Adjaratou Ouedraogo draws from the richness of African storytelling: Africa is full of resources, through its history, which has always been handed down from generation to generation by the guardian griots, the carriers of African wealth. (African women in Cinema Blog)


And ultimately, Sarah Maldoror asserts that it is up to black people to tell their story, to be the storytellers of their history:
My role as filmmaker is cultural.  What interests me is culture, to research films about African history, because our history has been written by others and not by us.  Therefore, if I don't take an interest in my own history, then who is going to do it?  I think it is up to us to defend our own history.  It is up to us to make it known, with all our qualities and faults, our hopes and despair—it is our role to do it! (Sisters of the Screen)

The African Women in Cinema Blog features interviews, synopses, film descriptions that highlight these African women cinematic storytellers. Following is a selection of articles, which will be regularly updated:

Safi Faye's Mossane: A Song to Women, to Beauty, to Africa
http://africanwomenincinema.blogspot.com/2019/05/black-camera-safi-fayes-mossane-song-to.html

Words of Frieda Ekotto, producer of the film “Vibrancy of Silence: A Discussion With My Sisters”
https://africanwomenincinema.blogspot.com/2019/03/words-of-frieda-ekotto-producer-of-film.html

Words of Marthe Djilo Kamga, director of the film “Vibrancy of Silence: A Discussion With My Sisters”
https://africanwomenincinema.blogspot.com/2019/03/words-of-marthe-djilo-kamga-director-of.html

Woman to Woman by Malika Franklin and Véronique Doumbé
https://africanwomenincinema.blogspot.com/2015/09/woman-to-woman-by-malika-franklin-and.html

Rahma Benhamou El Madani: “I try to reconnect with my roots through my films.”
https://africanwomenincinema.blogspot.com/2012/01/rahma-benhamou-el-madani-i-try-to.html

Email ThisBlogThis!Share to TwitterShare to FacebookShare to Pinterest
Labels: Storytelling