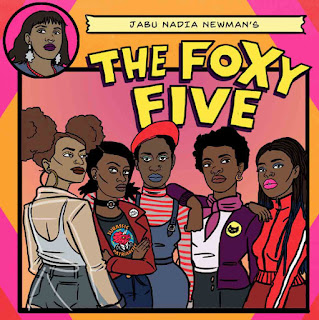 
Humour, black power feminism, badass empowerment, in-your-face sexualities politics are all components of the Foxy Five six-episode webseries: Unity Bond, Womxn We, Blaq Beauty, Femme Fatale, and Prolly Plebs and the Finale. There are definitely the influences of black women power flics of the 1970s USA, such as Foxy Brown, perhaps, inspiration of the title, and more particularly the actress, Pam Grier.

The “sister-friends genre” which focuses on a cohort of women uniting under a variety of themes seems to play a role in the construction of the series. Womxn We, Blaq Beauty, Unity Bond, Femme Fatale, and Prolly Plebs, all characters of the series, have particular roles. The actors are each very distinctive, with noteworthy talent. South Africa has diverse ethnicities which gives a rich variety of physical and cultural specificities, aspects that are very apparent in the series.

Description
This web series follows the adventures of the white- supremacist-capitalist-patriarchy smashing group of 5 young womxn from Cape Town –The Foxy Five. Each womxn represents a different struggle and set of ideals within feminism. Despite their ideological differences and the clashes they often cause, the womxn are a tight-nit sisterhood that always manage to band together in overcoming The Man.  (Source: YouTube)

The Foxy Five is a webseries that deals with issues of intersectional feminism and follows the lives of five womxn who are finding themselves in the young democracy that is South Africa, Cape Town.

The creator, writer and director Jabu Nadia Newman was particularly inspired during the #FeesMustFall protests and wanted to put all the new concepts and ideas that she was exposed to into a fictional webseries. (Source: Indiegogo)