Women of the Screen from the African Diaspora of Canada 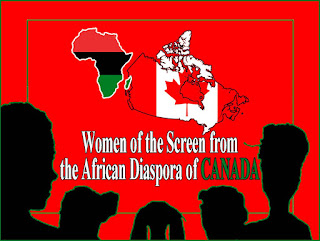 Women of the Screen from the African Diaspora of Canada
Cilia Sawadogo and Najwa Tlili were among the early African women filmmakers to make Canada their home to work and live. As a young university student Cilia, of German-Burkina heritage, came to Quebec to study, now decades later she is a professor at Concordia University where she teaches animation cinema. Njawa has made an important contribution to Quebecois screen culture, bringing a perspective that highlights the evolving diversity of Canadian society. She has been especially active at the Vues d'Afrique International Festival, an institution that has been at the forefront in promoting the African and Creole cultures of Canada.

In the past two decades other women have followed their footsteps, migrating from diverse African and Caribbean countries, as well as navigating between European African diasporas or connecting within the global francophonie. For instance, Dorothy A Atabong from Cameroon studied in the U.S. and Canada and navigates between the two locations. Also filmmaker, Lula Ali Ismaïl, based in Canada, has a foot in three continents, in Paris, Montreal and on diverse locations in Africa. Similarly, Malagasy cultural producer Tiana Rafidy followed a similar transnational trajectory.
With the documentary Into the Light, Togolese filmmaker Gentille M Assih focuses her camera on the empowering life stories of Quebecois women of West African origin, as they attempt to break out of the cycle of domestic violence. Tunisian-born Najwa Tlili brought this phenomenon to light decades before with her film Rupture. She had this to say in the 1997 interview with me: "Rupture is a film that addresses the problem of conjugal violence lived by Arab women in Canada. While doing this film about conjugal violence, I discovered that the complexities of this inquiry are tied to the circumstances of immigration, and the host country and its culture..."

Following is a selection of articles focusing on women of the African Diaspora of Canada published on the African Women in Cinema Blog: