Born in Antananarivo, Madagascar, Tiana Rafidy began her career as a model and later developed a passion for dancing. Her career took another turn when she played the heroine in the cult series Revy sa Ditra, the first Malagasy television series which ran for four years. Afterwards, she hosted several television programs and acted in a variety of films. After professional development in France and Canada, Tiana Rafidy accepted the challenge of writing and directing her own film, Lorety sy Mardy.  Tiana is now based in Canada. 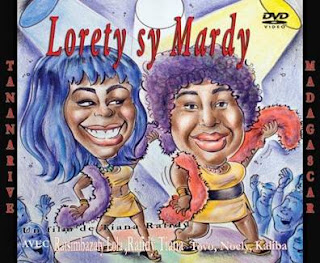 Lorety and Mardy is a story about a few days in the busy life of two young women caught up in the harsh realities of Antananarivo, the capital of Madagascar.  Under the influence of a con man, Mardy, who is from the countryside, goes to the capital in search of glory and wealth. Lorety, restless and undisciplined, lives in day-to-day survival mode in this huge city. The film is both a satire and drama of the situation of several thousands of people who live with little means in Antananarivo. A glimpse at the ins and outs of the residents of the capital, the film presents a fresh perspective on the rural exodus and the relationship between urban and rural Malagasy.

Correction: The original post stated that Tiana Rafidy created the company, Agence Lolita. Presently she is no longer the owner.
Posted by Beti Ellerson at 10:15