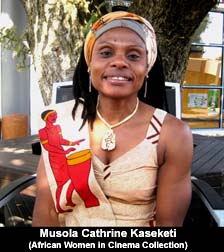 Musola, please talk a bit about yourself, your background.
Born in October 1968 the eighth of nine children, I grew up as a healthy and happy child. I was left with a permanent disability at the age of five from an injection in the nerve of my left leg; nonetheless, my family treated me as a normal child. I also lived with my stepmother who taught me to be independent and a fighter. Because of the caring way that people in my surroundings responded to me, I had no idea that there was discrimination towards persons with disabilities. In Sunday school I was involved in bible plays, the church choir and did poetry, and went on to primary school. It was in high school that I started to realised that I was not always accepted in society and therefore, not able to do certain things. Often my feelings were hurt after the many instances when the school authorities isolated students with disabilities from the enabled so that they could not get to know each other. My disability became a motivation to work harder and use art as a tool to communicate. I wrote poems, plays, stories and songs—though not making their message the main issue.
I first wrote Suwi as a stage play under the title “Rejection of Reality” after extensive research on disability. It was during that time that I met a man without hands who led a normal life and could even eat using a fork and knife. This encounter motivated me very much and inspired me to write a story about self-determination in 1989. It was very successful and was a catalyst for the change in attitudes towards disabilities in Zambia. In 1990 the production was shot as a teleplay and shown on the Zambia national television (ZNBC). The response was very good, though some viewed it as having a political subtext. From the latter response I came to realize the power of media. I continued to use dramatic poetry, writing and stage acting as a tool to foster the spirit of self-confidence and self-help, and to impart self-acceptance, self-determination and independent living.
Evolving from my role as actor, I had the privilege of attending the Newtown Film and Television School in Johannesburg, becoming the first Zambian woman filmmaker/director, and the first student there with a disability. While some of my fellow students and lecturers under-estimated my abilities to become a successful filmmaker, I graduated with honours including the award for Best Student of the Year 2000. Returning home to be a part of the development of the local industry in Zambia, I worked for Picture Perfect Production (PPP) in 2001 for a year and a half. There I accomplished many firsts, as a woman director of Zambia’s first soap opera, Kabanana. For a combination of reasons—being a woman and with a disability, I had to prove myself to some of the well-known actors who attempted to undermine me—within a few weeks skepticism changed to positive impressions among them and the press. Wanting to share my skills with aspiring filmmakers, in 2002 I established Vilole Images Production, where I have trained a number of young filmmakers.
Zambia is now developing a film culture and you have been part of that process. What is the state of cinema and filmmaking in Zambia?
Zambia is a nation filled with artists who have great potential in the area of acting and production. Unfortunately it lacks the institutions and financial means to develop these skills and because of this the documentary and drama productions are of poor quality, though there is a gradual improvement and with it an increasingly appreciative Zambian audience for local and African productions. The Zambian economy has declined significantly due to the weakening of its main industry, mining. Perhaps the development of a cinema industry may provide employment opportunities. Of course the government and the private sector must invest in this effort. On the other hand, the film industry is far from the point of reaching international standards, which is attributed to little or no experience in film production. There are only a handful of individuals who have experience, hence the need to train more filmmakers, including persons with disabilities, if the industry is going to improve. 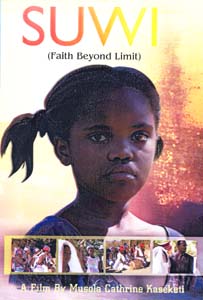 Suwi is a film that deals with important issues related to physical challenges and adapting to the dramatic changes in one’s life. Suwi also has an autobiographical element. What have been your challenges and how have they influenced the Suwi story?
Initially I hesitated about dealing with disability issues as the subject of my first film because I did not want people to think that I was telling my own story. Unfortunately or fortunately it became literally impossible to raise money for what I thought would be my first feature, "Kamukola", since I did not have a show reel. In 2004 I decided to shoot Suwi, which at the time was called “Rejection of Reality”. I was not happy with the sound and camera work, so I decided to put the project on the shelf. What I appreciate most is that this experience helped me to mull over the script and rewrite it to reflect the life of anybody with or without a disability. I have had my own challenges as a woman, as a woman with a disability and as a woman filmmaker, and thus I consider every challenge as a motivation to forge ahead. Since I was not accepted in society because of my disability, but because my family helped me to accept and appreciate myself, I sometimes turn my experiences into humour and speak openly about my disability when I meet people for the first time. Some of these aspects are incorporated in Suwi. The character Suwi is very strong and refuses to sit at home and do nothing when she incurs this life-changing situation; this portrayal may encourage people to not give up. In one way this could reflect my childhood. I refused to accept people’s excuses for why they are this or that way. Despite my disability I walked about seven kilometres to school in a torn uniform and shoes. I had it hard at home and as a stepchild and was stigmatised in the community as a child with a disability, but I never gave up. And as a woman filmmaker with a disability from a country where the industry is still in its infancy, challenges continue, but I carry on with my life.
Today, so many people in our community are either infected with HIV/AIDS, or affected because someone has it. That is why I portrayed Suwi caring for a street kid who lost her parents to AIDS. I have seen and visited many women with disabilities who are looking after orphans or who are HIV positive themselves, nonetheless, society still believes a woman with a disability cannot have AIDS because she is not normal. And yet this woman breathes, smells, eats, loves and has feelings. So Suwi to some extent was influenced by some of my personal challenges.
How has Suwi been received?
Suwi has been well appreciated, not only at home but also elsewhere, especially outside Africa. I am proud to say that it has attained many firsts as the Hon. MP Given Lubinda states to the Minister of Community Development Hon. Michael Kaingo: “The production is a first in many respects: the first Zambian woman director, first by a woman with a disability addressing a diversity of issues affecting women in the modern community, and first to be received so positively with awards internationally.” The film is an important contribution to Zambia’s budding film industry and a motivation to artists and women. So far it has had a positive influence on various people including some women with disabilities who have since left the streets as beggars and embarked on a path to reclaiming their dignity. It has also been used in medical institutions for students by the university teaching hospital in Zambia, for fundraising for the Cardiac Trust of Zambia, Habitat for Humanity Zambia, the Occupational Therapists Africa Congress in Malawi, and the Verona Film Festival will be using the film in schools and non-profit institution for the next three years.
What are some of the reflections of your audience regarding the film?
Sympathy, laughter, satisfaction, appreciation, upset with some characters.
Future projects?
I have three projects in the works. A 90 mn feature film “Kamukola” (Trapped), dealing with diverse themes: women’s rights to decision making, culture and tradition, freedom of choice, love, dishonesty and true friendship. As stated earlier, this was supposed to be my first feature. Now I am looking for funding and hope to start shooting early next year. I am working on a medical drama series, “The Doc, Sam Chileshe” set in a small village. It will address the clash between modernity and tradition in a health centre set in the rural area: challenges and beliefs in relations to AIDS, heart problems, witchcraft, love, among others. “Ndema Ikasa-Hold my hand” is a series of 26-minute short films on disability and accessibility.
Interview by Beti Ellerson (February 2011)
Suwi - Faith Beyond Limit (2009) by Musola Cathrine Kaseketi
Posted by Beti Ellerson at 10:20

Musola you are doing a great job.I have personally watched SUWI more than three times,that film is encouraging.its shows the fact that disability is not inability.we look forward to more works from you.