Music, Song and Dance in the Films of African Women 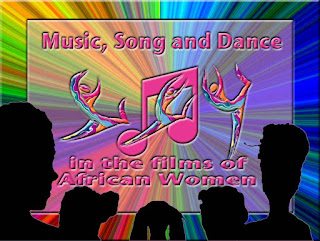 Music, Song and Dance
in the Films of African Women
by Beti Ellerson
Notes to continue...
“Haunting” is how Safi Faye describes the voice of Yandé Codou Sène, as it reverberates throughout the film Mossane, with recurrent chants, performing as the non-diegetic storyteller, setting the dramatic tone of the fate of the eponymous protagonist, the beautiful Mossane.

Yandé Codou Sène (1932-2010), the griot of poet-president Leopold Sédar Senghor, lauded his praises as she accompanied him on his official and social visits. The griot continues to hold an important place in African traditions. Safi Faye’s incorporation of Yandé Codou Sène’s voice highlights the manner in which the griotic chant within oral storytelling has functioned as a site of intergenerational transfer of cultural knowledge and the transmission of everyday political and social discourse. It is also the voice of conscience, asking questions about Mossane’s well being, about the ramifications of the choices that others are making about her life; its role is to interpellate and question the social order. It is all the more compelling that Yandé Codou Sène is not seen. Hence, her enthralling voice is an integral part of the narrative: introducing Mossane, the Serer legend, and the wandering beggar boy, joining in the ancestral ceremony; lamenting Mossane’s suffering, eulogizing her death and posing questions regarding the village’s fate.

Angèle Diabang's Yandé Codou, the Griotte of Senghor and Yandé Codou Sène, diva séeréer by Laurence Gavron, recount the life of this mythical figure, the only one who could interrupt Leopold Sedar Senghor’s speech with a song of praise.

Similarly, in the documentary Calypso Rose, Pascale Obolo's relates the world of this diva from Trinidad, "who has dedicated her whole life to music, to her art. In Nadja Harek's Tata Milouda, the slammeuses from Algeria flees her old life--abusive and violent-- and becomes a slam star in France. "Thanks to writing and slam, she reclaimed her freedom".

Afrikaners Rina Jooste, who worked as a freelance musician and for theatre productions tells stories using drama / music to portray social messages. Similarly, Rama Thiaw who was influenced by hip hop and the social movement brought about by the Senegalese activist hip hop group Positive Black Soul (aka PBS), reflects this activsm in her work. Her documentary, The Revolution won’t be televised, which shows her direct influence by Gil Scott Heron, the godfather of social and political hip hop activism, incorporates the elements of hip hop as a conceptual framework and symbol for change.

For Dyana Gaye, the musical comedy Un transport en commun | St. Louis Blues was a way to combine her myriad ideas from dance and music, using cinema to bring them all together. Similarly, Armande Lo, who has always been passionate about music, art and cinema directed the short fiction film Betty Jazz, about a woman who dreams of being a jazz singer. Caroline Kamya's Imani used music as the essential ingredient of the film, blending popular contemporary local language acoustic and hiphop, with traditional African rhythms beats: "The use of music that is an integral part of life in Africa and in the Diaspora take centre stage in my film." Tsitsi Dangarembga's Nyaminyami Amaji Abulozi (Nyaminyami and the Evil Eggs) is a musical adaptation of ancient Tonga folklore.
A selection of articles on the African Women in Cinema Blog about music, song and dance in the films of African Women

Rahma Benhamou El Madani: “I try to reconnect with my roots through my films.”
https://africanwomenincinema.blogspot.com/2012/01/rahma-benhamou-el-madani-i-try-to.html

Pascale Obolo : "Calypso Rose the lioness of the jungle"
https://africanwomenincinema.blogspot.com/2013/02/fespaco-2013-pascale-obolo-calypso-rose.html