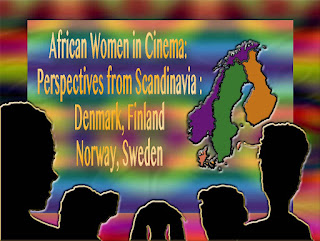 African Women in Cinema: Perspectives from Scandinavia - Denmark, Finland, Norway, Sweden
I enjoyed having two homes in different countries [Sweden and Burkina Faso], and it helped me to get a greater understanding and perspective of different cultures and values.--Theresa Traoré Dahlberg

That issues around identity, positionality and social location permeate film screenings and debates of the Scandinavian African Diaspora is indicative of its growing interest in focusing on African representations drawing from global Africa. Hence offering venues in which topics regarding the experiences of people of African descent may be raised, debated and understood. Swedish-Burkinabé Theresa Traoré Dahlberg, born to a mother from Sweden and a father from Burkina Faso reflects this diversity and desire to show realistic images of Africa in her filmmaking: Taxi Sisters about women drivers from Senegal, and Ouaga Girls, about women auto mechanics in Burkina Faso.

The Stockholm-based Cinema Africa Film Festival, created in 1998, provides a platform and forum for African films in Sweden. The 2015 edition was dedicated to African women in film, featuring film screenings and a panel discussion with African women directors.

Similarly, in 2015, the Danish Centre for Gender, Equality and Diversity organized "Stories Untold" a project that involved twelve women from Jordan, Oman, Tunisia, Egypt, Palestine and Lebanon, in order to tell their stories through film.

FilmAfrikana, an independent Oslo-based film festival founded by Norwegian-Ghanaian Lamisi Gurah, had as its objective to expose the Norwegian public to films by people of Africa and the African Diaspora. While it is no longer active--though the Nordic Black Theatre continues to thrive--its goal was to provide a different perspective regarding the African continent. The 2011 edition, featured women of Africa and the Diaspora in front of and behind the camera.

Finland has been a partner of Zambia screen culture since the 1990s, since then there has been a flurry of African-film focused initiatives. Pioneer filmmaker and activist Musola Cathrine Kaseketi received support from Finnish sponsors to attend the Newtown Film and Television School in Johannesburg, where she graduated with honors, including the award for Best Student of the Year in 2000. Her relationship with Finland continued with the creation of Vilole Image Productions in 2002, which was supported by the Embassy of Finland through the Fund for Local Cooperation.

Wanjiku wa Ngugi, a resident in Finland at the time, founded the Helsinki African Film Festival in 2010. She felt that even though perceptions of Finland give the impression of conservatism, to the contrary, she sees that there is much more openness within Finnish society, which was also evident by the fact that the festival initiative was supported by the Ministry of Foreign Affairs. Hence, Wanjiku used the Festival to create an opportunity to see a different view of Africa. Her objective for founding the festival: "to show the diversity of this continent, and begin a different conversation, one informed by a more realistic view as told by the Africans themselves."