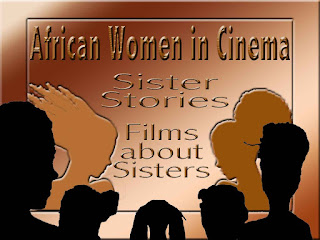 African Women in Cinema
Sister Stories | Films about Sisters
Sisters of the Screen, the title of my ongoing project on African women in cinema, invokes the notion of a kinship shared through screen culture. Within this "sisterhood" are also experiences of sisters who have biological relationships. They come together as collaborators on film productions, protagonists in films, daughters of a famous filmmaker mother--keeping her torch alive.

Annouchka de Andrade and Henda Ducados, the daughters of Sarah Maldoror (1929-2020) are continuing the work of the existing Archives that Sarah created which entails retaining rights, recovering and restoring copies of films. Their objective is to ensure that Sarah's work continues to be visible and that the archives are available to all. Their heartfelt reflections on her as "filmmaker, woman and mother" provide a rare portrait both intimate and holistic, of Sarah's life; and at the same time, demonstrate the indelible mark she has left on them as daughters--children of cinema. Two sisters who in their own lives and work, continue their mother's journey to have "an impact on this world"…"always moving forward".

Similarly, Senegalese sister filmmakers Khady Sylla and Mariama Sylla, who collaborated on seven films together, were in many ways, "children of African cinema". Their mother worked at the secretariat of the Actualités Sénégalaises under the direction of Paulin Sumanou Vieyra, a breeding ground and site for the development of the young Senegalese cinema of the period. Nicknamed “Katanga”, it was the venue of hot debates about cinema and other cinematic trends--realism versus Soviet, Italian neorealism, New Wave, Brazil Novo Cinema.... (Translation, cited from Baba Diop, in French)

In her interview, journalist/film critic Djia Mambu asks Mariama Sylla about her experiences working with her sister Khady Sylla, who passed away in October 2013 and to what extent her passing influenced the ending of the film:

Mariama Sylla responded in this way:

"I started working with my sister at the age of 17; she is the one who trained me and introduced me to cinema and scriptwriting. The person I am today is the result of this long journey with Khady, the first-born of our family. I am the youngest and she and I often laughed about being at these two ends, despite the difference in age and education, we were able to come together."

"Khady's passing greatly influenced the final voice-over in the film but the visual editing is the same, as we had completed it just before her death. There are two voices in the film. The first is Khady’s, which was done in her presence, and the second is mine, which I wrote while finalising the film. I went through a moment of shock and anger, then slowly, the phrase in Césaire's work Notebook of a Return to My Native Land was constantly in my thoughts, and all this anger turned into a desire to write about my sister, to tell her a final goodbye, and this is how my voice was laid down in the film."

The film A simple parole was completed after Khady's death. In spirit, the two sisters continued their work together.

Belgian-Congolese sisters Cecile Mulombe Mbombe—cinematographer, and Pauline Mulombe—filmmaker, collaborated on their first joint project, the short film, Tout le monde a des raisons d'en vouloir à sa mère (Everyone has Reasons to be Angry with her Mother). While they have assisted each other on their respective work, this is the first time that they made a film together. They selected the sets and filming locations and did the storyboard together, while Cecile dealt with the technical side—the choice of the technical crew, the equipment and all of the tasks that entailed transforming the script to the realization of the film and Pauline focused on the creative side, hence, her ideas are represented on screen—in terms of her vision of the actors’ roles, the film set, the mise-en scène. Their proximity as sisters provided an immediate level of confidence and understanding in each other. Pauline emphasizes this point: "Only Cecile could know that when I said 'green', in fact, I meant 'blue'." Moreover, Tout le monde a des raisons d'en vouloir à sa mère follows the experiences of three sisters who were born and raised in Europe though their mother insists on raising them based on African values. In our interview, Pauline had this to say about the three sisters:
"The youngest wants to enjoy herself and grow and develop by making the most of European social and cultural life. The middle sister wants to utilize all of the possibilities available to resolve her problems, even if it means doing things that are unthinkable in her culture of origin, such as taking the birth control pill when still an adolescent. The oldest, even if she does not openly show her homosexuality, knows that she is 100% gay."

The daughters at the same time negotiate their relationship with their mother while attempting to understand each other as sisters and as young African women living in Belgium.

Mary-Noël Niba comedy series "Jane and Mary", in 6-minute episodes, employs comedy to explore the everyday experiences of the eponymous sisters Jane who is 21 and her sister Mary, who is two years younger. Though at the same time close, their contrasting personalities animate the twists and turns of life in Yaoundé, where they live with their uncle Fred who is a wealthy businessman. Many times, it is in the light-heartedness of humor or comedy that the drama in relationships, and otherwise difficult situations may be resolved. In our interview Mary-Noël describes the use of comedy in this way:
"The idea is to highlight those situations that we joke about, though are not very funny, or the everyday occurrences that we laugh off, but that we really want to find a way out of. The use of a cheerful and comical tone is to downplay dramatic situations. The denunciation of certain everyday problems in fact draws attention to these realities, which, because of their frequency, become almost ordinary."
Hence, the emotional fluctuations in this sister-sibling relationship are treated with amusement and insouciance.
In constrast, Alda and Maria by Pocas Poscoal recounts the coming-of-age story of the eponymous 16 and 17 year-old sisters fending for themselves as they make their way in Lisbon. Hoping to reunite with their mother who ultimately does not make the voyage from worn-torn Angola. Partially autobiographical, Pocas draws from her and her sister's experiences as well as the many other Angolan immigrants. She had this to say about making the film:
"In the eighties, hundreds of adolescents were sent to Portugal to escape the war in Angola or to avoid military service. I was one of those young people. With very little money in our pockets, my mother put my sister and me on a plane to Lisbon. In war-affected Angola, Lisbon resonated in our ears like a promise of freedom. We arrived in that city with a heart full of hope. Though my mother was to join us soon afterwards, the Angolan state signed a decree banning anyone from leaving the country. At sixteen and seventeen years old, we were on our own in a Lisbon suburb..." (Cinemassy: Pocas Pascoal with Ciomara Morais, Cheila Lima. 2012).

Iman Djionne's film project in development, "Coura + Ouleye" centers on the relationship between 16 and 19 year-old Coura and Oulèye, paternal sisters born into the complex polygamous family in which their respective mothers are co-wives. After the unexpected death of their father they set off to find his will and in the process get to know each other. Iman had this to say about the theme of the film project:
"The starting point of this story was wanting to explore what that bond could be like in this particular context where mothers are in conflict, living and raising their children apart. Can it exist, can it thrive even? By doing that, I wanted to examine how one man’s decision affects an entire family, informing who those individual members become and how they relate to the world… Starting out as mirror images of their mothers, Coura and Oulèye’s quest will take them outside of Dakar, far from their family’s burden and society’s expectations, to find a way through their sisterhood to break free from that mold, become their own, and in doing that, possibly bridge a broken community." (Director's Statement-Produire au Sud).

Hence, the notion of "sisters of the screen" broadens to include "sisters on screen" encompassing the collaboration, representation, relationships and connections of biological sisters. Off screen, they collaborate in their production and advocacy as makers and stakeholders. As image-makers African women are striving to create complex, realistic, multi-dimensional representations of sister-sibling relationships on screen.
Report by Beti Ellerson
Following are links to the posts on the African Women in Cinema Blog from which the above texts were drawn.

The Sisters Act of Cecile and Pauline
https://africanwomenincinema.blogspot.com/2010/07/sisters-act-of-cecile-and-pauline.html

Reflections on: Another Gaze presents. The Legacies of Sarah Maldoror (1929–2020)
https://africanwomenincinema.blogspot.com/2020/05/reflections-on-another-gaze-presents.html
Posted by Beti Ellerson at 09:45