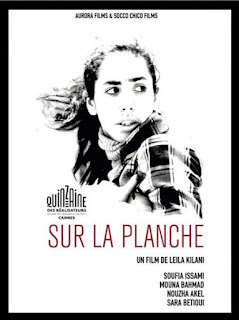 Sur la planche (On the Edge) by Leïla Kilani, a critique by Olivier Barlet (Africultures) translated from French to English by Beti Ellerson.

Her skin, she rubs it with lemon—almost pulling it—to remove the smell after a day of shelling shrimp at the factory. To detach herself from the conditions of an underpaid and ill-housed worker, she plunges into another life—the evening, during which the lexicon of terms is reversed: "I do not steal, I am getting my refund. I do not burglarize, I am getting back my due. I do not traffic, I do business. I do not prostitute myself, I invite myself." In voice-over, Badia’s words are expressed in slam—the same pace as her life, as her movements, as the camera that closely follows this rat race, as does the mis-en-scène that she shares with us. To survive is to charge headlong. Badia is a reflection of the young people in the film Microphone by Egyptian Ahmad Abdalla, of all the young Arabs who make revolution, having nothing to lose but a wasted life, everything to gain by going for it: "I’m already what I’m going to be. I am only ahead of the truth, my own. "

Leïla Kilani captures these young people on the edge. Her project is neither psychological nor sociological: it is not to be explained. It is on the surface, tactile—not superficial, carnal, at skin level ! It is a manner of showing that only in this way can one understand the current mutations, that all communication will run against a wall, that these societies will lapse into violence if they do not provide a future for their youth. Badia, along with the other three girls with whom she prepares her evening ploys, rushes headlong into the void. Her destiny can only be fatal. These young people full of desperate energy are on the verge of collapsing. They are on the plank, ready to jump.

This manner of radical directing and acting was necessary to capture this tension—shot with quick pacing, as close as possible to the body, a body which in order to escape confinement only thinks about making it through, of getting by. Their thirst for live is expressed as much by their unrestrained language as their actions. Factory workers by day, the young women at night search for men and ways to push the limits. Surviving by day, living by night. Badia talks a lot and very quickly, only making coherent her headlong flight. Reflecting the cunning youth unencumbered by rules, she improvises daily life by ruses and circumventions; not as an escape, but rather as a plunge into the frenzy of life.

Needless to say, the tourist image of Morocco takes a hit, starting with Tangier, the birthplace of the director, a buffered city, for a twofold reason: it is the first contact point for car-bound travellers and the point of no return for migrants trying to cross the Mediterranean. It has been a while since Leila Kilani has dealt with postcard stories. In Le rêve des brûleurs (2002), she presented a personal perspective of Tangier, this physical, corporeal, sensual frontier, stirring with men and women who dream of a mythical somewhere that they cannot find on this side of the barrier. With Nos lieux interdits (2008), she documented the restriction on speech and the internalisation of political violence in Moroccan society on the occasion of the Equity and Reconciliation Commission that the new king established in 2004 in order to reconcile with victims of human rights abuses. With On the Edge she addresses these zones, areas of appalling exploitation and lawlessness that swarm the planet and that is never talked about.

This disturbing and astonishing film, which scored at the Directors' Fortnight at Cannes in May 2011, has the allure of rap-like urbanity and brilliantly combines the guts of the director and her actors, starting with the impressive Soufia Issami who gives her character Badia all her indomitable energy. With On the edge, Leïla Kilani enters into the big leagues.

Sur la planche (On the Edge) by Leïla Kilani, a critique by Olivier Barlet (Africultures) translated from French by Beti Ellerson.