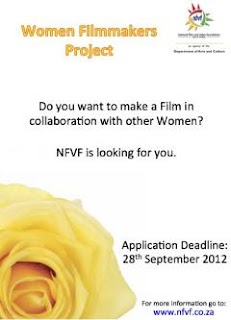 05 September 2012: The National Film and Video Foundation invites all eligible female filmmakers to respond to the Call for Proposals for the production of a low budget film aimed at female filmmakers as part of the Tier 2 development process.

The concept for the Female Only Filmmaker Project is to provide recent female entrants into the industry, particularly those from historically disadvantaged backgrounds, with an opportunity to make a film in collaboration with other women. Successful applicants will be guided in the development of their stories into 48 minute scripts over a period of 5 months.

The ten best scripts will then be work shopped for camera in preparation for the production of the films over a five week period. During this process each director will be provided with the necessary tools to break down scripts for camera as well as detailed strategies for extracting the best performances from the actors.

The successful projects and teams will then be provided with a professional production crew to shoot their film. A post-production supervisor will be appointed to assist them in the editing and final delivery of the film.

Finally, a special premiere of three of the best completed films as chosen by their peers will be held at a suitable venue to be confirmed with the cast, crew and creative personnel as well as NFVF council and staff.

In order for a filmmaker to be considered for this opportunity, the applicant must meet the following requirements:

a. Have worked in the industry for at least two years.
b. Have worked in one or more of the following: writing, directing, editing, cinematography or producing.
c. Be a Historically Disadvantaged Individual as defined in the constitution of South Africa.
d. Be able to set aside the requisite time over a period of 9 months to complete the programme.

Eligible candidates for the project must:

Have a strong written concept for a one hour stand alone film with a clearly thought out premise or controlling idea that would allow it to be packaged with at least 4 other projects.
Demonstrate familiarity with the tools of scriptwriting including software, formatting, scheduling and editing.
Demonstrate a willingness and ability to work with others in pursuit of the same objective.
Understand the value of and is able to work under pressure and tight schedules.
Have a showreel that demonstrates their creative abilities.
Have written, directed, photographed or edited two or more short films, documentaries or commercials.

All applications should be able to provide the following documentation in hard copy triplicate for consideration:
1. Narrative treatment for one hour film including character bible, detailed synopsis, major turning point document.
2. CV and copy of ID document.
3. Showreel

All applications must be submitted as hard copies to: Thandeka Zwana by the closing date.
All enquiries may be directed to Thandeka Zwana.