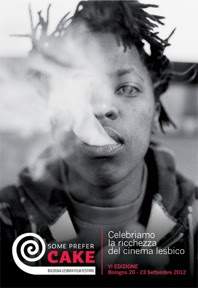 With a rich international selection in lesbian cinema, the festival proposes four days of film screenings (fiction, documentaries, short and animation),  as well as exhibitions, debates and exchanges with the public.

Visual activist Zanele Muholi will be the guest of honour of the 6th edition of Some Prefer Cake with an exhibition and audiovisual project focusing on the life of lesbians in South Africa.

Continuing this rich exploration of lesbian histories with U.S.-based Indian filmmaker and gay activist Sonali Gulati on the victory of the LGBT Movement against the Section 377 of the Indian Penal Code criminalising homosexuality.

And finally a focus on theory with a tribute to two principal figures of U.S. lesbian thought, the late poet, activist and writer Audre Lorde (with the latest film about Lorde), and theorist and poet Adrienne Rich who died in March this year.
Posted by Beti Ellerson at 20:54