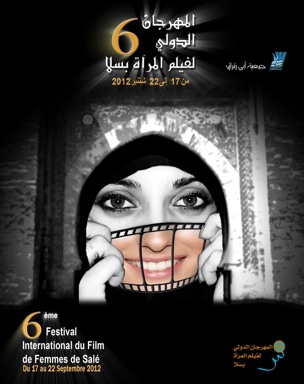 The city of Salé, separated from the Moroccan capital Rabat by the Bou Regrag River, also has a festival dedicated to women.

From 17 to 22 September 2012, the 6th Edition of the International Women Festival of Salé was on target with many activities. Eve was very present, taking part in the festival as actress and director. In addition, films by male filmmakers focusing on women were included.

The opening film, Allemanya, a German production by the director Yasmin Samdereli of Turkish origin, dealt with the question of identity as a six-year-old child is rejected by his friends. Twelve films were in competition as follows: Morocco with the film Androman…of Blood and Carbon by Az larabe Alaoui; Egypt represented by the film Asmaa by Amr Salama; Djeca (Children of Sarajevo), a production from Bosnia-Herzegovina directed by Aida Begic;  Hanezu by Naomi Kawase of Japan; Holland was represented by the film Black Butterflies about the South African poet Ingrid Jonker directed by Paula van der Oest; the United States also answered “present” at the festival with the film entitled La dernière piste by Kelly Reichardt; and the German filmmaker Jan Schomburg was part of this edition with his film, Above Us Only Sky; Christine François from France participated with a French-Benin co-production entitled The Secret of the Ant Children; another co-production, this time the Franco-Swiss film, The Child from Above directed by Ursula Meier; Russian Angelina Nikonova presented her film, Twilight Portrait; the film Rania by Brazilian Roberta Marques was also presented; and finally the filmmaker Andrès Wood participated with the film Violeta Went to Heaven, a Latino-American co-production (Chile and Argentina).

As usual, a tribute was made to four women of cinema:  Nouzha Drissi, who died 4 December 2011 while preparing the 4th edition of the documentary film festival that she founded; nationally renowned Moroccan actress Amina Rachid; the Egyptian Taysser Fahmi, known for her political engagement and a notable figure at Tahrir Square in Cairo at the time of the 25 January 2011 revolution; and finally the Iranian Fatemeh motamed Arya also committed activist for women and children’s rights.

During the evening of Saturday 22 September, Salé set the date for another meeting at the 7th edition 2013 as the results of the jury were announced. The jury members, composed solely of women filmmakers and actresses, included: Aruma Vasidev of India, founder of the Asia Film Festival of New Delhi; Egyptian actress and television series star Abeer Sabir; Iranian actress Fatemeh motamed Arya; filmmaker and producer Fanta Régina Nacro of Burkina Faso; for Morocco the host country, was filmmaker Salma Bargach; and French actress and filmmaker (and singer when necessary) Myriem Mezieres.

The closing ceremony of this edition caused delight for the Japanese director Naomi Kawase with the film Hanezu, which won the grand prize of the festival; and Az ara Aloui with his film Androman…of Blood and Carbon, which shared the Jury Prize with the Chilean film Violeta Went to Heaven by Andrès Wood.

This edition also announced the creation of the Union of Moroccan Filmmakers and Authors (URAM) whose objective is to contribute to the professionalisation of cinema; its president is the young filmmaker Nawfal Barraoui.