Commemorating the International Day of Peace: The Night of Truth by Fanta Nacro On the occasion of the International Day of Peace, 21 September, we highlight the film, The Night of Truth (2005) by Fanta Nacro to reflect on peace, "both within and among all nations and peoples", the message that the United Nations wanted to convey by declaring this Day. 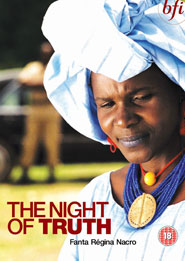 The Night of Truth (La Nuit de la Vérité), the audacious feature debut of the award-winning Burkinab female director Fanta Rgina Nacro. Set in an unnamed African country, after ten years of bloody war, The Night of Truth dramatises the process of truth and reconciliation, echoing the recent histories of South Africa, Sierra Leone and Rwanda, and highlights not only the female perspective but also the subtleties and complexities of learning to live together again in trust and respect.

Genocide, raw and recent, is not far from the minds of the Nayak and Bonandé peoples who have been locked in a decade of bloody ethnic conflict. Now, the President (commander of the Nayak national army) and Colonel Theo (controller of the rebel Bonand army) are determined to end the conflict. A celebration is arranged, but cynicism remains on both sides and - as the evening wears on - tension mounts. Not only have drums been banned from the musical entertainment, because, in the past, they were used as a call to arms, but many of the women, notably the president's wife Edna, cannot simply forgive and forget. The evening comes to a climax when the village jester Tomota, a Nayak-hater, indignantly decides to beat the drums during the festivities. The sound becomes a trigger that releases the feelings of distrust and fear that have been suppressed by both sides.

The Night of Truth was conceived in memory of Fanta Nacro's uncle, accused of inciting a coup, and who was murdered in a horrifically brutal way. Compelling performances from a cast of mainly non-professional actors lend an eerie authenticity to film (all of the men are played by members of the Burkina army). The professional actress Naky Sy Savané is particularly outstanding in her role as Edna, who is grief-stricken over her son's death and harbours a bitter lust for revenge. Her brooding performance conjures an atmosphere of sinister foreboding, demonstrating the extent to which official peace deals are undermined by the lasting psychological wounds inflicted by war.

Fanta Nacro was the first woman from Burkina Faso to direct a fiction film (the short Un Certain matin) and The Night of Truth, which has won awards at film festivals around the world, is a stunning example of the rise of African women filmmakers, bringing a new voice and perspective to African cinema.