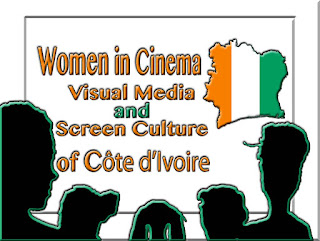 Cinema is a vehicle for unity and social cohesion--Naky Sy Savane
Martine Ndah directed her graduation film Tresse à la douzaine in 1988, at the Parisian film school Varan, the first film by a woman Ivoirian director. After a pause, in the late 1990s, productions from the Ivoirian diaspora were also part of the Ivorian cinema culture, notably with the works of French-based filmmaker Isabelle Boni-Claverie. The popular cult series “Ma Famille” (2002), renamed “Ma Grande Famille” (2007) when re-launched, was conceived and directed by actress turned filmmaker Akissi Delta, whose long career on the screen of Ivoirian cinema added to the public appeal of her production. Inspired by the story behind her success, Ivoirian Siam Marley presents a portrait of her role model in her film Couvre Feu (2016).

For Naky Sy Savane being an actress is also being a feminist activist in the context of cinema as a form of engagement. In 2005, she created the Afriki Djigui Theatri to promote African culture in Côte d’Ivoire. In addition, she helms the Ivorian-based FESTILAG, the Festival international du film des lacs et des lagunes (International Lakes and Lagoons Film Festival). At its 2019 edition she brought together actresses throughout the continent for the historic general assembly of African actresses. During the festival event tributes were made to the pioneering actresses of African cinema.

Actress-activist-producer Hanny Tchelley, who founded the International Festival of Short Films of Abdijan, also produced the 2002 series, Vies de Femmes. The 26-minute series of six episodes traces the experiences of six prominent African women in West Africa. Sita Houelefohoua Silue's short film about energy and the challenges that rural societies face, further highlights the role that African women take on as activist-cultural producers. Moreover, Marie-Christine Amon and Alexandra Amon had this to say about their series Chroniques Africaines: Chroniques africaines: "With two women at the helm of Chroniques africaines [producer Alexandra Amon and director Marie-Christine Amon], we hope one day to have the privilege of being among the women who have marked the audiovisual industry in Africa...".

Marguerite Abouet’s acclaimed graphic animation film Aya of Yopou City (2013), highlights the broad spectrum of the genres that Ivoirian women image-makers have embraced and offer to their spectators.

Akre Loba Diby Melyou puts a spotlight on the ubiquity of digital technology and its impact on societies across the globe and in Africa in particular. Her series, simply titled "Blog", reflects the growing relevance of social media in Africa and its importance to Ivorian women of the screen.

The African Women in Cinema Blog endeavors to present the myriad screen experiences of Côte d'Ivoire. While not claiming by any means to be exhaustive, the Blog presents a small selection of voices that are indicative of the diverse and wide-ranging screen cultures of Côte d'Ivoire.

Links to articles on the African Women in Cinema Blog:

Naky Sy Savane: “Cinema is a vehicle for unity and social cohesion” – International Film Festival of the Lagunes
https://africanwomenincinema.blogspot.com/2013/11/naky-sy-savane-cinema-is-vehicle-for.html

A Conversation with Siam Marley
https://africanwomenincinema.blogspot.com/2012/03/conversation-with-siam-marley.html

A Conversation with Isabelle Boni-Claverie
https://africanwomenincinema.blogspot.com/2010/03/conversation-with-isabelle-boni.html
Posted by Beti Ellerson at 05:49