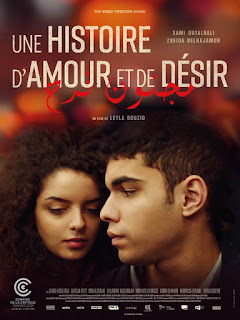 "Une Histoire d'amour et de désir"
"A Tale of Love and Desire "
Interview with/avec Leyla Bouzid by/par Falila Gbadamassi
"A Tale of Love and Desire" or when Leyla Bouzid takes an interest "in the romantic initiation of a shy young man". Interview by Falila Gbadamassi, Africine.org, published 24/08/2021.
Translated from French by Beti Ellerson, an African Women in Cinema Blog collaboration with Africine.org.

A Tale of Love and Desire closed the International Critics' Week at the last edition of the Cannes Film Festival. With tenderness and care, the second feature fiction film by the Franco-Tunisian director recounts the budding love and amorous tribulations of a young student couple of North African origin. The film was in competition at the Angoulême Francophone Film Festival held from 24 to 29 August 2021.

Falila Gbadamassi: What inspired you to want to make this film?

Leyla Bouzid: A lot of things came together but the initial idea was to focus on the romantic initiation of a shy young man. I wanted to describe these emotions and construct a story of emancipation around a young man particularly from North African culture. Little by little, things evolve that nourished the film.

This film may seem to have as its purpose to clarify to the spectator, that the idea that you have today of Arab culture concerning sex and love was constructed by completely erroneous images…

In any case, it is an image which is reductive and oversimplified. Thus, the idea is to propose a level of complexity, nuance and subtlety where we are often too restrictive. I do not think the film can completely change this image, but at least it is making a point by saying that there are other representations beyond what is being shown at the present.

Your feature film is very instructive. In it we find interesting literary references precisely on love and desire treated by Arab authors. What was your research process? Where did you find your sources?

I tried to read and find information to nourish the characters who discover this literature and, indeed, there is an educational dimension because the protagonists themselves learn these texts. There is obviously a lot more information than what is presented in the film.

Your attention is focused more on the character of Ahmed, and Farah, who he falls in love with seems more liberated than him when it comes to matters of love. Why this choice?

It seemed to me that a young Frenchman of North African origin can experience difficulties with love, may be shy and reserved; and that a young Tunisian who arrives from Tunisia, though not necessarily liberated, may not, at any rate, have problems at this level. However, Ahmed only represents himself. I wanted to talk about a shy young man. These people exist but are rarely represented. We are always stuck in clichés. We only see representations of men of North African origin with a very virile, visible masculinity on display.

You explain why he is shy and to what extent social pressure can play a role. Ahmed lives in the outskirts of Paris where his peers have very set ideas about matters of love or relationships between men and women. They have constructed codes of which they themselves do not know the origins. Ahmed talks with a big brother of the neighborhood who he respects and who explains to him, among other things, that their Arab-ness has been stolen from them, the content of which remains unclear, even for him, who makes this claim. Is there an explanation for this type of situation that you relate in your film?

They are in search of an identity and of a reclamation. They themselves don't know. This is what the film is about. I do not know what this means either, but I am trying to put a level of complexity into all of this. The film has an interest in this Arab identity but it is also a film about a romance. And Ahmed is not shy because of the neighborhood, where there can be a form of sexual misery, or at any rate, where there are difficulties living a love relationship. Ahmed is shy because he is someone who has an inner world, who likes to read and who probably has a very pure vision of love. That is his temperament.

How did you choose Sami Outalbai, who interprets Ahmed, and Zbeida Belhaj who embodies Farah?

Sami, who interprets Ahmed, has been acting since he was very young, though in secondary roles. I saw him in the ARTE drama mini-series Fiertés by Philippe Faucon, where he played a small role, but he seemed really interesting to me. When I saw him, I thought to myself that he was within the age range, and he had the profile and physique to be Ahmed. I met him and he immediately signed on to the project. I then cast him and he was incredible: he has a very beautiful voice when he reads the texts. I met Zbeida in Tunisia. I discovered her during my previous film [As I Open My Eyes, her first feature film released in 2015]. She was very young then: she was 14, she was the right age. I wanted to make sure that she was someone who lives in Tunisia.

In a way, you are a woman who puts herself in the shoes of a young man with the character of Ahmed. How would you explain this?

I don't know if I put myself in his shoes but in any case I try to get a sense of what he might be experiencing, to follow him and to film him. I looked at him and tried to be with him. But he eludes me a bit too. He has a part of the mystery that I left up to him to express.

You are Franco-Tunisian. Presently, African cinema is also very much that of its diaspora. Do you think that your gaze is different from that of a filmmaker in Tunisia or is there, in fact, no real difference since, no matter where you are, the perspective you have of your country or cultural space does not actually change?

I grew up in Tunisia and came to France at the age of 18. For this film, I think that my journey and my trajectory have allowed me to take a step back from the discourse about the Maghreb community in France and what it is considered to be, which often does not consider its diversity. So I am putting diversity within diversity. Our trajectory necessarily nourishes our perspective. Hence, my journey is nourished by my lived experience and the fact that I am from another country when I arrive in France. It's a great opportunity to have a double culture and to be able to have that kind of distance. Afterwards, depending on the projects and films, there are stories that can be told from anywhere. You don't have to be from one place or another. For this film, the issue was about the questioning of identities, an interrogation on the representation of this identity. I am always mindful of authenticity, and it is also nourished by what I have seen.