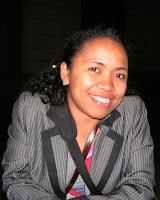 Domoina Ratsara, Malagasy film critic:
Putting Madagascar onto the cinema landscape
Domoina Ratsarahaingotiana, film critic and journalist, studied communication and local development. Interested in the empowerment of minority groups, her aim is to give them a voice.

She is president of the Association des Critiques Cinématographiques de Madagascar (ACCM) created in December 2018.  She has served on numerous juries and is becoming increasingly visible in film criticism discourse and debates.

Her focus on film criticism emerged around 2010, while participating in various cinema-related events. There, she realized the power of critique and the cinematic gaze and the importance of the image in people's perceptions of themselves and their society.

As a Berlin Talents" invitee of the 68th edition of the Berlin International Film Festival in 2018 she talked about her emergence in film criticism. Below is a summary.

Most of the time African cultures were portrayed by people from the outside, with exterior perceptions of the continent. That is why it is important for Africans to talk about their own culture, their own history. Most people in Madagascar do think that cinema can bring changes in perception of what we are and can actually change the future. A part from poverty there is a richness--and cinema can change this image. In the coming years, I wish that we will have relevant works that will project Madagascar onto the cinema landscape.