Rosalie Ndah, president of CNA Afrique talks about the CNA tribute to women at Fespaco 2013 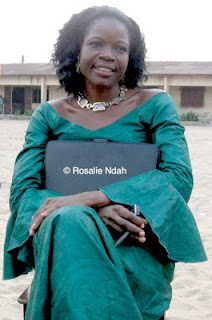 Could you described the CNA for us?

The first objective of the Cinéma Numérique Ambulant, known as CNA, is to promote African cinematographic heritage in all of its diversity. It was actually introduced in Africa for the first time in Benin in 2001. During the last twelve years it has progressively expanded to Niger, Mali, Burkina Faso, Senegal, Cameroon and Togo. CNA has become a network of associations and the coordination structure, CNA Afrique, is headquartered  in Ouagadougou, Burkina Faso.

The CNA is an important cultural tool for communication and entertainment, bringing African films to African populations marginalised by their geographic or socio-economic isolation. It also provides immediate accessibility to the public, giving it both a popular aspect and an educational value. The CNA opens up possibility and access to a collective imaginary,  a source for reflection, and oral testimony and dialogue among the populations regarding different traditional practices and their evolution.

CNA screenings take place outdoors and are not like other events which are viewed with little reflection before returning home. The CNA encourages the exchange of ideas regarding the world and cultural intermingling among people. In so doing, it cultivates a discerning cinema-going public and participates in the development of African culture.

At the present, CNA consists of eight not-for-profit associations with 15 screening units as well as the coordination structure, CNA Afrique. With twelve years of experience of thousands of screenings, the CNA has brought together nearly twelve thousand spectators. The CNAs work in collaboration with French, Belgian and Swiss corporations, the European Union, the national cinematography directorates, TV5, and RFI. In addition the CNAs have participated in several awareness-building campaigns with decentralised associations, Plan International, UNICEF, Amnesty International, the United Nations Population Fund, the national programmes for the fight against HIV/AIDS, Support Programmes for Cultural Initiatives SPCI (EU), SCAC of the French Foreign Ministry, Rencontres africaines de la photographie (EU), Save the children, The National Programme for the Education of Democratic Citizenship, the Embassy of Canada, the Festival of the Théâtre des réalités, Cannes Festival, Respect, the Canadian Foundation for Innovation CFI etc.…

What are the CNA activities at Fespaco 2013?

Since 2005 the CNA has always participated at Fespaco with various and noteworthy activities. For Fespaco 2013, its activities are as follows: A meeting is scheduled for 24 February for the expansion of the CNA Afrique board. CNA Afrique is opening its board to prominent figures who have supported the CNAs throughout the years, and to respected players in African civil and cultural society.

To add a special touch to the festival, each evening the CNA network is organising a screening of a film that has been especially popular with the audiences. This event, which is called  "Fespaco Classique", will take place 25 February to 01 March at Maquis le Festival, which since the last Fespaco is called "Village CNA". This is an opportunity to have the participants of each film talk about the context of its creation, the conditions of the film shooting, and the production, etc.
The CNA programme facilitators will present the feedback from the spectators of each film screened and African films in general.  They will also give a report on the oral testimonies of the reception of and audience responses to these films.  All of this information is in effect meticulously recorded by the CNA facilitators in a notebook at the end of each outdoor screening.

On 26 February, the CNA will set up a commission of rights holders made up of film professionals: filmmakers, producers, distributors, organisers, cinematographers, and those overseeing authorial rights and copyrights, in order to improve its remuneration policy, and to integrate its economic model into the African cinema economy. The commission will meet every two years in tandem with Fespaco. Its goals are as follows: to evaluate on an annual basis the participation of CNA countries in the remuneration of royalties, depending on the budget of each of the associations; identify the claims of the rights holder; notably those sold to several structures; follow up on the actions of the CNA and its remuneration policy as it relates to the profession; facilitate the affiliation of CNA countries with the rights holder offices of each country; and assist the CNA in networking and maintaining transparency in the profession.

CNA in partnership with AfricaDoc, also has a presence at Fespaco with an evening dedicated to creative documentary filmmaking by women. What are the specifics of this event?

On Friday, 01 March the evening will be dedicated to documentaries by women with the screening of two films. The discussion will be moderated by specialist of the film world: filmmakers, critics and CNA facilitators. Looking to organise an evening around award-winning classics of Fespaco, and noting that, since the creation of the Yennenga Stallion Award in 1972, there has yet to be a woman laureate, CNA wanted to organise an evening around the woman-directed documentary, an especially rapidly growing genre. AfricaDoc, our partner for this event, considers that, as a result of the agility of the digital, there are as many women as men who work in the area of the African documentary. It is particular to Africa, and  in many ways thanks to the training and promotion by Africadoc. Yet, they often remain unrecognised. Evidently, there are exceptions, notably in Burkina Faso where women filmmakers are very visible.

Many women filmmakers are turning towards the documentary rather than to fiction. First of all because the mode of production is much simpler than for a feature fiction; and moreover, because numerous African women documentarians come from journalism. At Fespaco 2009, those who stood on top of the podium for documentaries were all women. It is certainly necessary to take action as it relates to women's place in society, but also there is a willingness to raise the consciousness of the population in terms of traditions (such as lip tattooing in Mon beau sourire | My Beautiful Smile by Angèle Diabang), comportment (such as it relates to virginity in Le prix du sang | The Price of Blood by Anne Elisabeth Ngo Minka) or misconceptions (such as in the Witches of Gambaga by Yaba Badoe) which persist without really being questioned . It is definitely important to bring out the importance of women to fight harder to find a place in all sectors of society by highlighting their creativity, their personality, their intelligence, as well as their willingness to continue onward. To accomplish this it is important to increase considerably the literacy rate among women, especially in Africa. An illiterate society is a society in stagnation, always oriented towards the past. It is time for women to totally commit themselves to filmmaking with passion and determination in order to express their way of seeing the positive and of discerning opportunities, where a man would view it as senseless.

A woman-directed documentary may show something special and different from what one may find in a film directed by a man. Representations by women are to be encouraged in all sectors of activity in order to better develop society. It is for this reason that the CNA is actively engaged in increasing the visibility of works by women filmmakers and for the dissemination of creative documentaries.

This year, Fespaco is putting women in the spotlight.  A remarkable occasion: all of the juries are presided by women. The large festivals, in fact, are only marginally accessible to women, and this does not happen only in Africa. Last year there was a petition by woman filmmakers to pressure the Cannes Festival to have more films by women in the selection for the Palm d'or.

Even in the history books of African cinema, there is very little mention of women. In spite of the official discourse which pays tribute to women, there is very little impact. Hence the proliferation of women's film festivals. Moreover, until now cinema has been viewed as a man's profession. And the fact that in Africa there are such great difficulties to make a film and to earn a living from it, does not encourage women to enter into it.

Programme of CNA activities at Fespaco
Ai Village CNA at Maquis Le Festival, at 300 metres from Cinéma Neerwaya in Ouagadougou

Sunday 24 February
Starting at 11h : Meeting of the CNA Afrique Board

At the Village CNA located at « Maquis Le Festival »