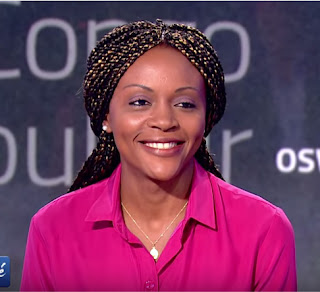 Presenter, Vanessa Mulanga: The Images of Black Women Festival in London is a tribute to black women in front of and behind the camera. An ideal place to meet talented women such as Osvalde Lewat, a film documentarist from Cameroon. Her themes are universal, such as the world of Amerindians or a story about one of the oldest political prisoners of Cameroon. If you do not yet know her, you may meet her on “Tête-à-Tête”.

My name is Osvalde Lewalt-Hallade, I am a filmmaker from Cameroon. I make documentaries. My last film, Une affaire de nègres, in English, Black Business, was released in 2009. Before, I made a film on the Amerindians of Canada. Also in Congo about women and war. And two films in Cameroon. My path is a bit ecletic as I focus on very different themes. Nonetheless, the themes converge as they focus on exclusion, injustice, the desire to change one’s circumstances.

I came to cinema because I felt a bit constrained in the area of journalism. As journalist one deals with subjects, that with hindsight, I found a bit superficial. And once the report is made it is somewhat out of date.  In cinema, one may deal with more important subjects, have one’s point of view on the subject, delve deeper into it, and that is what interested me.

It is always difficult to make a film, for a woman or a man. The problems can increase coming from Africa because there is no infrastructure to finance our films and thus the necessity to seek Western financiers. It is also difficult, when one has a family to take care of, to reconcile these elements. My male counterparts have less difficulty.

Nonetheless, today women have more opportunities, more doors are open, there have already been mechanisms set in place for women to work within her family life. I am happy to be able to be in this profession, especially as an African woman, as there are not very many, though the numbers are increasing. I realize that as we become more numerous this will provide the impetus for not only women, but also for African cinema as a whole.

Filmmakers whose films speak to me? I would say Ousmane Sembene, who is no longer with us. I would say Souleymane Cissé, Mahamat-Saleh Haroun; they are some of the filmmakers with whom I connect. There are others in the documentary genre such as Jean-Marie Teno, who has made very good films. And those who I have not named should not be jealous, I love all of your films.

I don’t think that this is a controversial film.  What should be controversial is not that I made a film about the Operational Command Unit, but rather that 10 years later there has not been real justice. What concerns me is not that people find the film controversial, but that there are those who think that the subject should not be broached. And that’s a pity. I think that we must confront our past in Africa, those parts that are glorious and good, but also those difficult moments.  In order to build one must look at one’s past and for me the film was about bringing to light a part of Cameroon’s history that was not well known.

I did not feel any pressure when making the film, as I did not talk about it and I made it rather discreetly. However, after the film was released the Cameroonian members of the crew did feel some pressure. I did receive some hostile telephone calls but nothing beyond that, so I feel fortunate.

There was no official censure of the film. When it was screened in Cameroon, those who wanted to see it were discouraged from doing so. And yes, it is a rather troubling film. It is unfortunate that Cameroonians are not allowed to see a film that speaks about them, their history. A film that is a mirror of their society at a certain moment.  It is not a film that gives a bad impression of Cameroon; that criticizes Peter, Paul, or John. It is a film that makes a statement about Cameroonian society.

It is not about winning a prize. I am trying to add my contribution to subjects that interest me. My next film will be shot in Israel, which is some distance from Africa, but it is a topic that touched me.

I am not sure if I would say there is such a thing as an “Osvalde style” perhaps there is an “Osvalde perspective” on things, on events, on people, I hope so.  Because it is this perspective that leads me to make the films that I do.

It is important to have a clear perspective on things. Also an optimistic outlook. Coming from Africa and aware of the difficulty to exist on the international scene, we must hang on, and continue to believe that the future has good things in store for us.

March 20, 2000, a decree by the President of the Republic of Cameroon set up an Operational Command Unit to tackle rampant banditry in the Douala region. The Unit introduced what amounted to round-ups: one thousand and six hundred people in one year disappeared or were killed. One year after, nine young men disappeared. The matter was submitted to the UN High Commissioner for Human Rights. The accused were found guilty of "failure to follow orders" and released but legal proceedings have not come to an end. The families of victims have to live between the desire for justice and the pressure for the crimes to be wiped forever from the collective memory.

Osvalde Lewat-female voiceover: What was I doing on the 20th of February 2000? I don’t know. On that day, the head of state of Cameroon, my country, created a group of trained operatives which consisted of the army, the police, the gendarmerie and the fire department. Their mission was to tackle rampant banditry.

Male voiceover: We began to find bodies, scattered throughout the city, we lamented all of the people that were reported dead or missing.

Osvalde Lewat-female voiceover: The operative remained active for a year.

“The police in Cameroon has as its fundamental mission, to terrorize the people.”

Question- Osvalde Lewat-female voice: “Were you among those who were shooting”

“I was in the section where shots were fired.”

Osvalde Lewat-female voiceover: One morning, Charles will see his own son shot before his eyes.

“But when you kill someone, you experience a certain delight.”

“If he was killed it must be stated openly.”

Osvalde Lewat -female voiceover: Today in Cameroon, no one wants me to remind them that the Operational Command Unit was sanctioned by the population.

“Do not be afraid” “Shoot the people as I have order.” “And we shot them.”

Osvalde Lewat-female voiceover: No one wants to be reminded of the Green Number which allowed anyone to call free of charge—to denounce, accuse, their neighbor, brother, sister.

Male voiceover: Everyone who was part of the Operational Command Unit has left a scar on this location.