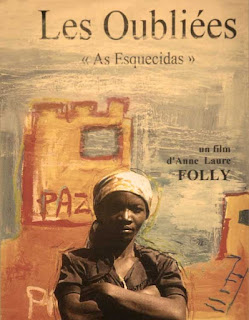 From the African Women in Cinema Archives

"I have always been interested in women's discourse, because I think it is an alternative discourse.  I have always treated my themes from the perspective of women."

"Initially the idea was to talk about war, to make a plea for peace.  In analyzing situations of extreme war, I had a choice because there are many extreme situations throughout the world.  I chose one of the longest wars of the century, the war in Angola.  It has lasted thirty years, for the last thirty years: the people have been fighting.  The purpose was to have an alternative discourse, one that was not simply based on the reasons for war—which always seem to be legitimate; nor one that is filled with dates or simple facts."

"I tried rather to treat the problem of war from the women's perspectives.  Their perspective does not simply analyze things; they live them.  That is what I proposed as my initial premise, and it was filmed along that line.  In fact, the women that I encountered told me things about the history of the country that had nothing at all to do with what we know of the history of their country."

"It is not only about women, it is a plea for peace, and I treated war not through the ordinary perspective that we have about the facts and events, the battles and territorial gains, but rather from a perspective that is specific.  Women have a different perspective about this history, especially of a war that has lasted more than thirty years.  They experienced the war based on personal suffering, having lost people they know, and sensing the impossibility of being able to provide a future.  They live this history from another point of reference and I found this interesting."

"I decided to not approach this plea for peace from an intellectual level, because we are all for peace.  I wanted to hear it from people who spoke from the guts about their fears.  We respond more radically for peace, but within the reflection, "really this violence has to stop."  The film comes more so from the guts, reason should not be the basis for bringing up the problems of the world, because reason is not sufficient to change things."

[Why the topic on the war in Angola?]  "It is an exemplary war, not only for Africa but also for the world. It is nearly the longest war of the century; it has lasted for the last thirty years. There is an entire generation, which only knows extreme violence.  There are people who live in a world where morals do not exist, where in the absence of morals the only rule is: To survive you must kill. I also find it interesting because it was a war that took all forms.  Initially it was a war to end colonization and then an East-West conflict involving Cuba and South Africa, and afterwards a civil war.  Perhaps there were several motives for the war but, nonetheless, it continued to be one group fighting against another, which leads one to believe that the motive had only one interest at stake, which was war itself."

"I think that [women] bring another discourse, I am not saying that women view the world differently, but they do not have the same social function in society. The women in the countries where there is war are all victims. They participate in the war to assist in the survival of their children, sons, and husbands, but that is all, and then they lose them. Yet, they do not actually participate. In the film, there was a woman who said, "One day I was in the war zone and I saw the Cubans coming." This was an amazing image of a woman who did not know what was going on. She has been wandering around the country for the past ten years. I think these perspectives bring about another appreciation of the world, of values, and I am always for another discourse."

At the press conference for Les Oubliées:

Sarah Maldoror speaks from audience: "The first point that I want to make to Anne-Laure Folly is that your film is outstanding, it is fantastic. Because you are a woman, you have the respect for life, because you have courage.  You could have been blown up a hundred times in those mines, but you were not, thank God.  I think that you had courage to do this film.  And it is very well done, and it gives one something to think about.  And that these women who fight and suffer, who are hungry, could actually do a theatrical play, I find extraordinary.  I regret that there are not more women who can be here to participate in this peace effort.  Because if we women do not do it, it will not be the other African filmmakers, who, alas, are not at this conference…"

Anne-Laure Folly: "I would like first to thank Sarah, she inspired me to do this film.  She did a film called Sambizanga, which in my opinion is one of the masterpieces of African cinema.  When I saw it, I had a desire to make a film thirty years later, about Angola.  She cleared the way by showing the Angolan war interpreted from the perspective of a woman.  Mine is not a pioneering approach; she has already done that."
Posted by Beti Ellerson at 21:52