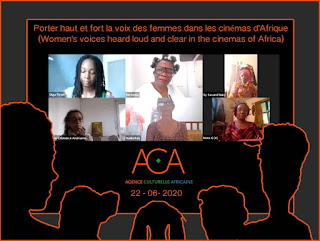 The first Zoom e-conference of the Pavillon des Cinémas d'Afrique in a Programme of Roundtables organized by the ACA-Agence Culturelle Africaine, was held on 22 June 2020. Producer, director, actress, film critic, came together to discuss their experiences and concerns in the world of cinema.

Hortense Assaga, introduced the round table by highlighting the eternal question of gender parity. She posed several questions as a point of departure: Here we have women who work to have their voices heard and be recognized as full-fledged members within the profession of cinema. How does this manifest itself in Africa? On other continents? How do these women manage? What are their strategies? How do they ensure that their work is recognized, that their presence matters? How do they experience these practices of gendering? How do they negotiate the myriad discourses and politics of gender?

The exchange unfolded less as a "roundtable" dialogue where the participants interacted with each other, but rather as a moderated discussion fed by questions from Hortense Assaga to individual women. Hence, the more existential aspect of the introductory questions--especially as it relates to practices of gendering--were less developed. At the same time, an array of important issues relevant to film professionals in general were explored, highlighting what many women have often asserted, that while women have concerns that are gender-specific, others are shared by both African women and men. For instance, some of Marie-Clémence Andriamonta-Paes's responses from Hortense Assaga's questions around gender were framed in the context of Euro-centric dominance of ideas and values. Having always partnered with her husband, who is also a film professional, there are daily struggles in general. In addition, film critic Fatou Kiné Sène cautions against always looking through a gendered lens, which may distort the actual merit of a film: "It is merit and not our status as a woman that allows us to "box" in the same category as men." Similarly, animation filmmaker Nadia Rais notes that while women in animation are rare, there is already the question of being an artist, hence, the art form of animation cinema adds to the complexity of the question. Since there are not many animation film festivals, these films are included in the midst of fiction films, though the genre is very different: "We're part of another group, and sometimes we feel like we don't really exist. So our problem is not the issue of being a woman."

Nonetheless, the gendered question of women's experiences in cinema was firmly rooted throughout the discussion.

Hortense Assaga asks, "as a filmmaker and producer, how does she position herself in the context of gender?" Marie-Clémence Andriamonta-Paes has developed an attitude of perseverance: "Coming from a society where women forge ahead as a matter of course, looking out for the most vulnerable in society is active work... everyday it is necessary to say that being a filmmaker from the South, that these stories are equally important." Nonetheless, she admits that the environment within cinema "is very patriarchal, very concentrated, that there is a dominance of men in positions of power...And hence, many women in the profession are often in a position to have to manage this status of inequality...It is in this context that more most be done to build awareness that this is not normal, to have to obey and serve."

For Naky Sy Savane, being an actress is also being a feminist activist in the context of cinema as a form of engagement, which Hortense Assaga, interprets as a commitment, a way of being part of the struggle. "As a feminist, we can't let things go on like this because there are generations following us. If I have a choice, I take the scenarios that advance the cause of women." Similarly, for actress/filmmaker Maïmouna N’Diaye, "to make films is to speak up and say out loud what many people think but do not dare say, in particular women, children and vulnerable people. I think it is our duty, in fact, to use this tool as a voice and shake up things, as a means to make things change so that we can move forward together." Hortense Assaga highlighted Maïmouna N’Diaye's role as the only African on the main jury at Cannes in 2019. She responded: "I felt a bit alone, but this loneliness allowed me to think of all my sisters, from all over Africa, and it gave me strength. I said to myself I am representing all of these women. I was proud of it and it gave me the strength to do it."

Fatou Kiné Sène, who was elected president of the Dakar-based African Federation of Cinematographic Critics (FACC) in 2019, notes the importance of the association website africine.org in order to give more visibility to all African films. In Senegal, the Films Femmes Afrique festival highlights the works of African women on the continent. In 2013, FACC created the Women's Cinema Month. Similarly, Naky Sy Savané, who is also founder and organizer of the Ivoirian-based FESTILAG, the International Film Festival of Lakes and Lagoons, highlighted the creation of ACAI, l’Association des Comédiennes Africaines de l’Image (Association of African Actresses of the Image).

Olga Tiyon, production and communication coordinator of "7 jours pour 7 films", emphasized the importance of framing gender broadly in all aspects of the filmmaking process: "As a result, by putting more emphasis on gender, it is easier for these women to enter areas in which they did not have easy access."

Video-recorded and uploaded on YouTube on 23 June 2020 (https://www.youtube.com/watch?v=xlHF4wQzeHA), excerpts translated into English from the French-language event.