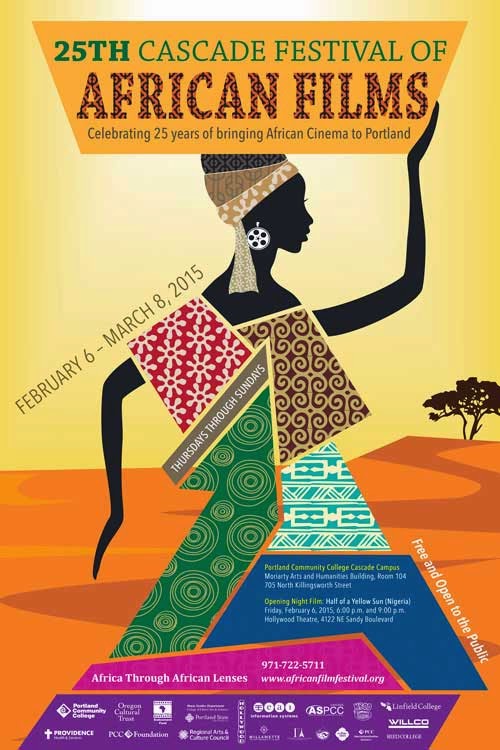 The Cascade Festival of African Films (Portland, Oregon USA), which celebrates its 25th year, is held during the months of February and March, thus commemorating the U.S. celebration of Black History Month and Women’s History Month, respectively. The closing week of the festival features Women Filmmakers Week, which includes retrospectives, tributes and recently released short and feature film.

The 2015 lineup of films for Women Filmmakers Week:

Synopsis: A contemporary drama set in Nigeria, about one woman’s desperate need for a male child. It explores the discrimination of women in the names of culture and religion. Winner of the 2014 African Movie Academy Awards for Best Film in an African Language.

Synopsis: The difficulty Joffi faces in her first pregnancy is made worse by the petulant and selfish demands of her irate and uncompromising husband, Ekema. Things come to a comedic head when Ekema wakes up one morning to a world very different from the one he went to sleep in.

Synopsis: Five-year-old Amira lives with her mother in a cramped apartment in Tunis. At the moment to return to the Koranic school, Amira desperated seeks a way to grab a few more hours off. She finds nothing better than to stick her hand to the arm of the chair with super glue...

Synopsis: On 16 July 1969, America prepares to launch Apollo 11. Thousands of miles away, the Zambia Space Academy hopes to beat America to the moon. Inspired by true events.

Synopsis: a short abstract diary montage of the artist’s thoughts, feelings and experiences as a bi-cultural female of color in the U.S. and Mali, West Africa.

13-year-old Felix dreams of becoming a saxophonist like his late father, but his mother thinks jazz is the devil's music. When Felix is awarded a scholarship for grade eight at an elitist private school, he defies his mother and turns to two aging members of his father's old band to help him prepare for the school jazz concert.

Synopsis: Aissatou Ba is an African immigrant maid and single mother who must decide whether to move on with her life or fight when the case against the hotel guest who assaulted her is dismissed. But how can she restore her lost dignity?

Synopsis: Sophie, Abdoulaye and Thierno’s three destinies cross paths and echo one another, delineating a constellation of exile. Sophie journeys from Dakar, Senegal, to join her husband Abdoulaye in Turin, Italy. Meanwhile, Abdoulaye has left for a new job opportunity in New York, hoping to stay with Sophie’s aunt. However, Sophie’s aunt and 19-year-old son Thierno are in Dakar for Thierno’s father’s funeral. With these three characters’ destinies, Under the Starry Sky takes us on a journey through the diversity of the cities the characters travel to, confronting us with the realities, hopes, and dreams of contemporary emigration.

Synopsis: Bound takes us on a journey through the corridors of African and African American historical experiences as it illuminates the moments that divide and those that bind Africans and African Americans, culminating with ideas that promote reconciliation without assuming it is a quick fix.

Synopsis: The West African fable of Kwaku Ananse, a spider/man trickster who teaches that there are two sides to everything and everyone, is combined with the story of a young outsider named Nyan Kronhwea attending her estranged father’s funeral. Nyan’s father led two separate lives with two wives and two families, one in Ghana, one in the United States. Overwhelmed by the funeral, Nyan retreats to the spirit world in search for her father.

Synopsis: When her mom gets sick, Kibibi’s dad must take her to the market to get her hair braided before school begins. Soko Sonko is a hilarious, fish-out-of-water roller coaster of a journey about a well-intentioned dad who goes where no man has gone before… because only women have been there!

Alia, a singer in post-colonial Tunisia, looks back at her childhood in the palace of the Beys, the local rulers. Her mother was a servant in the palace that was a virtual prison for the women destined to be “in service.” Alia relives how her mother, the brave and beautiful Khedija, fought in relentless silence to protect and save her from the destiny that her mother had had to suffer.

Links from the African Women in Cinema Blog