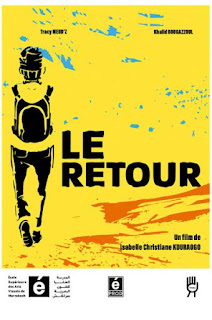 Salimata, a Senegalese woman studying in Morocco, decides to return to her country to see her mother who is in critical condition. What does this perilous journey, upon which she embarks with little means, have in store for her?

Passionate about cinema and digital technology since her childhood, Isabelle Kouraogo, from Côte d'Ivoire, pursued directing. After starting her career in television, and wanting to devote herself to cinema, she studied at the École Supérieure des Arts Visuels de Marrakech (ESAV).
This is perhaps what inspired her film Le Retour, where we find a young Senegalese woman who hitchhikes from Morocco to cross the Mauritanian border to be with her mother who is ill. During this return to her country, a journey upon which she embarks with no financial resources, she confronts the fear of unknown drivers, starting with Rachid who gives her a ride in his van, initiates a conversation and begins to make ambiguous proposals. On a winding and deserted road, a sort of rodeo of feelings, both wary and sad, emerge within Salimata.
She has courage and determination. But between the skeleton pendant which hangs in the truck and the revolver spotted in the glove compartment, there is a feeling of death that threatens her. Isabelle Kouraogo draws on the codes of both the western and Hitchcockian suspense to orchestrate the confrontation between the two protagonists, who for the most part remain in the closed environment of the driver's cabin, up until a tense altercation. It is then that a decisive reversal occurs which makes Le Retour a rite of passage tale right to the end, which is also very western.   Tense, poignant, fascinating and very sober, the film keeps us in suspense, providing us with a subtle reversal that highlights the contribution of Black cultures in a society that is losing its moral values.
Posted by Beti Ellerson at 04:41