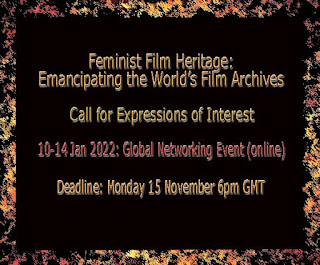 Expressions of interest are invited from international scholars and practitioners with a specialism in the history of global cinema, for a series of networking events that aim to map out the neglected women’s film heritage of the world. We particularly want to invite those with an interest in women’s cinema from the 1960s, 1970s and 1980s. This project aims to establish an international network of scholars working on decentring film history, and to do so by countering feminist film history’s continued neglect of filmmakers from outside Europe and the US. Hoping to give shape to fuller configurations of the internationalist feminist movement, we look at the cinema of the Non-Aligned Movement, highlight historically transnational networks and reactivate those past alliances.

With this project we want to make more visible the role of women and their films in the global film archives. As contemporary global women’s moments defy Western patriarchy, but the decolonisation movement unfolds a tendency to perpetuate male canons, this project lives at the intersection of emancipatory waves in film history. We hope to establish a collective of world cinema historians that will enable us to realign film history with its contemporary ethics. Bringing together disparate efforts to safeguard individual corpuses of film cultures and heritage, the researchers in this network envisage increased collaboration across borders. Better awareness of presences, absences, practices and methodologies will enable new collaborations between partners across borders.

This initiative is rooted in a desire to consider the diverse methodologies of decolonizing film history in an activist feminist way. We critique the continued Western European dominance of funding and infrastructure for these efforts (including our own). We address the (neo-)colonial history of archives, museums and festivals; the sense of “service” practiced by these institutions; and the (material and conceptual) ownership of artefacts and restorations. This network emphasises the roles of women filmmakers in history; the contributions of feminist scholars to film historiography; and the women workers shaping the structures on which the archival and preservation institutions are built.
The first collaborative networking event will take place 10-14 January 2022, with a follow-up event in January 2023. These events will gather international film historians, archivists and restoration technicians, to map existing work and seek out productive pathways towards collaboration. The first event will be a week of online networking workshops, organised by QMU in Edinburgh and funded by the Royal Society of Edinburgh. Delegates will be invited to share special interests and knowledge and practice ‘non-aligned’ methodologies: mutual respect, integrity, non-aggression, non-interference, equality and mutual benefit and peaceful co-existence. The hope is that this may result in recognising archives and preservation facilities and professionals, identifying films and filmmaker collectives, self-reflexively locating work, filmmakers and archivists, and collaborating with one another for further research.

Email ThisBlogThis!Share to TwitterShare to FacebookShare to Pinterest
Labels: call for collaboration